Superheroes assemble! Ahead of the upcoming 2018 Superhero Tri part of the Superhero Series, Double Paralympic, World and European 100m Champion Jonnie Peacock has thrown a surprise training day for competition winners set to join him on Team npower. 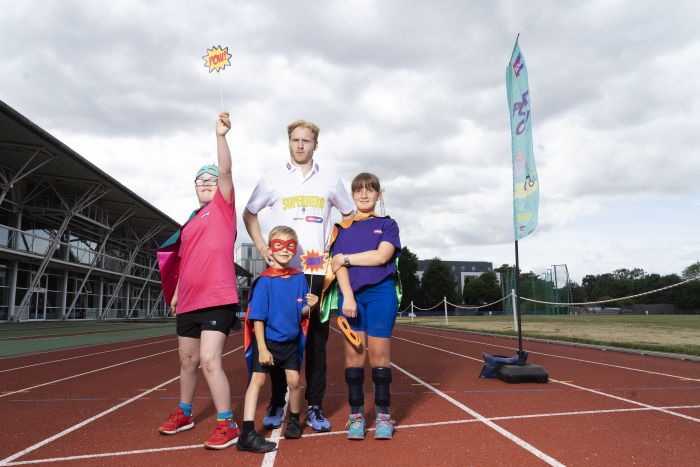 Compiled of three unique challenges, people of all ages and abilities can get involved with the triathlon. The Superhero Tri will see participants either fly solo, unite with family and friends for the team relays, or Superhero’s can be towed around the entire course as this year’s brand-new Sidekick Tris.

It is a sporting event unlike any other. 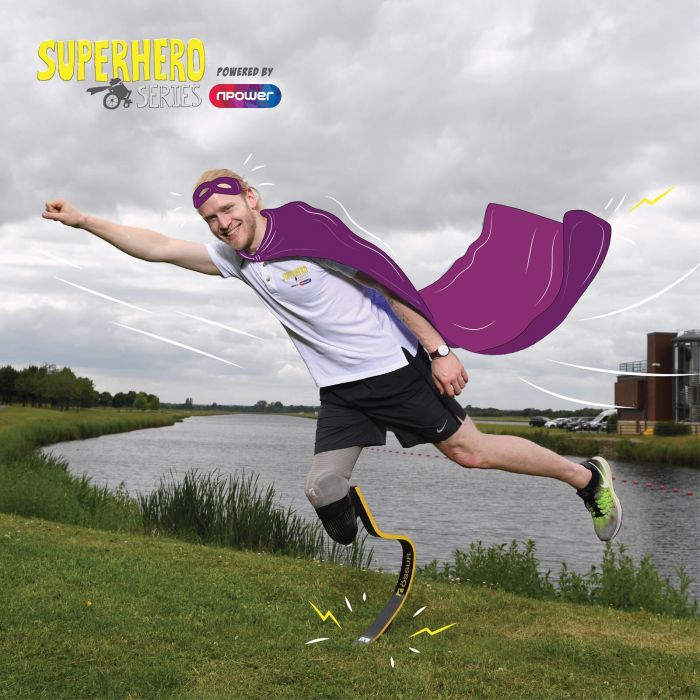 Preparing to meet the lucky winners, Jonnie spoke with Enable to tell us how excited he is to not only help train his team mates but to get stuck in with the event.

“I think anyone doing this can see that it is such a great event and it is getting bigger and bigger,” enthuses Jonnie. “What sets this event apart is the fact that it is all inclusive, absolutely everyone can take part. It’s not restrictive in any way and there are no real rules or regulations about it either.”

Jonnie agrees: “I think that this is showing that every disability can come along, but also not just disabled people as well there are also able-bodied people… It is literally not specific down to one category. Any disabled person and able-bodied person can get involved and have a bit of fun. I think that’s why it is such a great event and it is going to get bigger and better, hopefully, showing that every single person can get involved.”

Originally launched on 19 August 2017 the turnout was phenomenal. There were 1,700 participants and 7,000 spectators. Similarly, the npower Winter Wonderwheels event has similar solo or team-based challenges.

Preparing for the Superhero Tri, Jonnie spent today training with three lucky competition winners who are now part of his team. To enter the competition, families nominated their Everyday Superheroes revealing their Superpowers, with Daisy, Danielle and Owen being crowned winners.

“Daisy thought Jonnie was Father Christmas, I’m not sure why,” laughs Lyn recalling the moment her daughter Daisy met Jonnie this morning. “It has been amazing and the organisers have done a brilliant job.” Daisy, who has Down syndrome, will be involved in the swimming section of the triathlon with Jonnie and her fellow competition winners.

Have you got what it takes to be a Superhero? Retweet to help us spread the Superhero word. SIGN UP now & save the day. https://t.co/enn4ewieO7 @npowerhq pic.twitter.com/gKzSWnk2CZ

Danielle will be in the cycling challenge and six-year-old Owen will be running. “He will be running along with Jonnie for Team npower. At the moment he is running around in circles with a big smile on his face and doing superhero poses,” says his mother Kirsty. “He’s a sporty child he’s just trapped in a body that’s got cerebral palsy, unfortunately. He doesn’t let that stop him at all.”

Owen is involved in many sports including skiing with Disability Snow Sports UK, football, running and horse riding. Young Daisy also rides horses as well as swimming; it’s clear all three competition winners will be a fantastic asset to Jonnie’s team. How is Jonnie feeling about it all?

“I think that I normally let the team down so I will prep them on that! It’s all on these guys to give me as big a gap as they can so I can eat into that because I’m going to be so slow,” laughs Jonnie. “We’re just going to have a really good laugh, share some jokes and some memories.

Taking place in the world class 2012 Paralympic rowing venue Dorney Lake in Windsor, the Superhero Tri event is not only highlighting the importance for inclusive sport but giving the competition winners, participants and people watching at home the drive to get up and get active.

“The fact that these Paralympians are giving up their time to come along and meet children like ours, and to inspire them is overwhelming. They must have had a much harder time than our children are going to have because they’ve paved the way for our children in sport,” explains Kirsty.

“There are so many more opportunities around than even ten years ago. Our children are so lucky now. Obviously, there is so much work to do but the opportunities are far greater than they ever were before. I think coming off the back of London Paralympic Games 2012 that made a massive difference.”

Until the big day, Jonnie and his team will be getting in some additional practice before the fun and memories begin on Saturday 18 August.

Keep up to date with all the Superhero Tri events on our Twitter! Channel 4 will be broadcasting the Superhero Series on Saturday 1 September.

Under the lens of Alzheimer’s disease