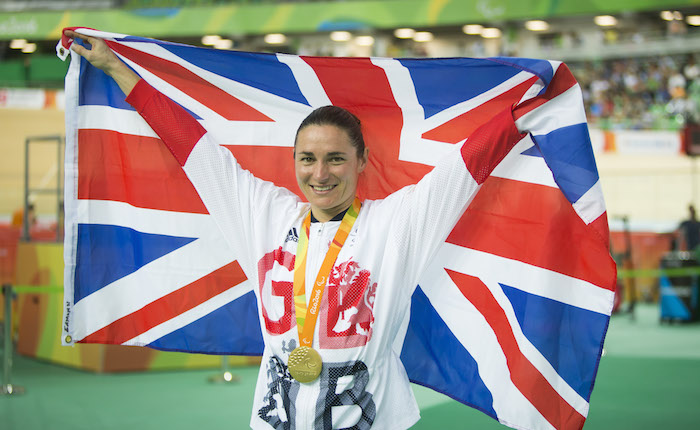 Pregnant with her second child, running an elite women’s cycling team and eyeing up the Tokyo Paralympics in 2020 too – it’s a busy time for 14-time Paralympic gold medallist Dame Sarah Storey! We caught up with the swimmer-turned-cyclist to find out more about her incredible career to date

First of all, congratulations on your baby news! How are you feeling about the arrival of Baby Storey number two?

We are all very excited, having a new addition to the family will be amazing.

With a sporting career, does starting a family take a bit of planning between major events?

As an athlete, your body is your tool and without it you can’t perform to the best of your ability. As such, timing a pregnancy is crucial, if you can, and we have been very fortunate that it was possible for us to do this in the first year after a Games on both occasions. The most crucial time for an athlete is the final two years prior to the next Games, so the pattern of using year 1 to have the baby and maintain fitness in pregnancy, year 2 to build back up as post pregnancy and birth allows and years 3 and 4 to be moving on again to challenge at the next Games.

Once the baby arrives you don’t get maternity leave as in most jobs, because your body wouldn’t cope well with so much time away from training and competition, but equally coming back too quick or early can have a detrimental effect on infant feeding and the recovery of the body, specifically the stomach muscles. Additionally there is the logistical challenge of travel and taking your baby with you so that you can continue to feed. It’s quite an under-explored subject, with many parents encouraged to make their baby as independent from them as possible as quickly as possible. This can have a negative effect on a baby and small child as by our nature, we are supposed to have contact with our mother just as you see across the animal kingdom. A baby takes their immunity from their mother and will thrive on skin-to-skin contact right through their early years until school age and beyond. Some people say that it’s irrelevant whether an athlete parent is a male or female, but they are failing to recognise the biological need of an infant to be with their mother. It’s a complex issue and those who suggest that women coming back to sport after a baby is no different to a father are ill-informed.

You’ve had an incredible career. You’re officially Britain’s most successful female Paralympian – how does that feel?

It’s an incredible honour to have such a title, and a huge testament to the support I have had to allow me to train and compete for what is now 25 years at the highest level. I never really targeted it as a goal, and when the media were talking about it prior to my first race in Rio I was trying not to think about it because Baroness Tanni Grey-Thompson has always been an incredible mentor and supporter for me and I have always looked up to her. You never expect to match the people who have inspired you.

You started in swimming, but you’re now a cyclist. What do you enjoy about both sports?

I love swimming because of the work ethic it teaches you, the need to be organised to fit everything in around schoolwork and the skill of being able to survive in water. Swimming isn’t just about sport, it is about being able to save your own life or the life of someone else.

In cycling there is also the enjoyment of the sporting competition side of the sport but also it is a sport that lives inside our everyday lives as a tool of transport. Cycling gives you the freedom to explore the world without ongoing costs such as fuel and car maintenance. Although a bike isn’t free and you have to maintain it, the costs are far lower and you are able to get to places without the limitations of a car. I have seen so many incredible parts of the world from my bike and going at the slower pace you notice more too.

What do you enjoy about sport generally?

The health and wellbeing aspect of sport is the key point for me – the competitive edge is a bonus! 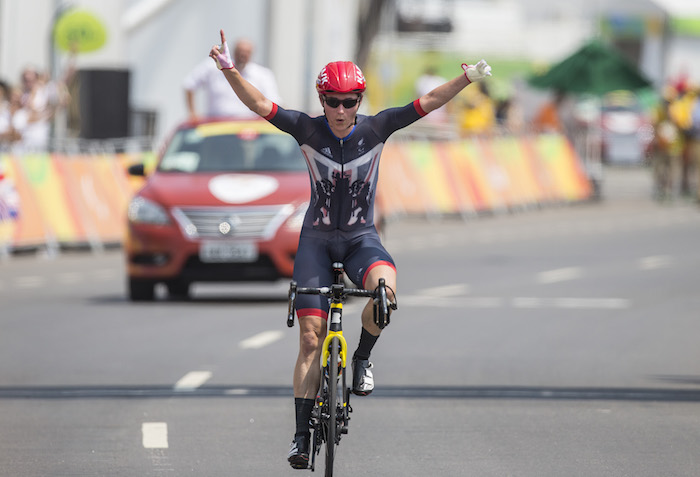 You and your husband Barney now head up Team Storey Sport. Can you tell us a bit about what it is you do?

Team Storey Sport is our motivation company, educating people on mindset and coaching them to be the best they can be. We have always worked to the mantra of #BestVersionOfYou, meaning that we encourage the people we work with to find their own best performance and focus on the process goals to reach their ultimate outcome. It’s a strategy that is effective in all areas of life so our main reason for setting up the business was to ensure we had a platform to reach out to corporate and educational establishments that were keen to use our sporting experience to enhance the education of their internal audiences.

Both Barney and I have a small coaching roster each where we provide bespoke coaching to cyclists. For me, it’s been entirely focused on under 23 women and I have just got an opening to take on another rider, so it is always exciting for me to find the next client.

You launched Storey Racing, an elite women’s cycling team, earlier this year. What made you decide to set up your own team?

Storey Racing was in fact our second attempt at an elite cycling team as we had previously run the team Podium Ambition. That team folded at the end of 2016 and we decided to launch a team in our own name after taking advice from a variety of sources. Team Wiggins is obviously hugely successful and so we were advised to use our name to create a team that would hopefully bring in interest from sponsors that are not currently familiar with cycling but are aware of the success of my career.

How are things going for the team so far?

It’s been a successful first few months, with the team securing success at every event we have entered. We have won the Women’s National Road Series, something I won personally in 2012, and have also shown we are the highest achieving amateur team at the two professional races we have had wild card entry to.

Do you feel that interest is growing in women’s racing?

Yes, and there are some incredibly hard-working people trying to drive up coverage and increase exposure, but it still doesn’t receive the mainstream TV coverage and column inches that it deserves. We continue to hear about trivial football stories when there are some major news items in women’s sport. The constant argument is about where the demand is, but why do people always assume that there is such a huge demand for football news above all else? It would be great to see more of a balance and to see sport covered equally. 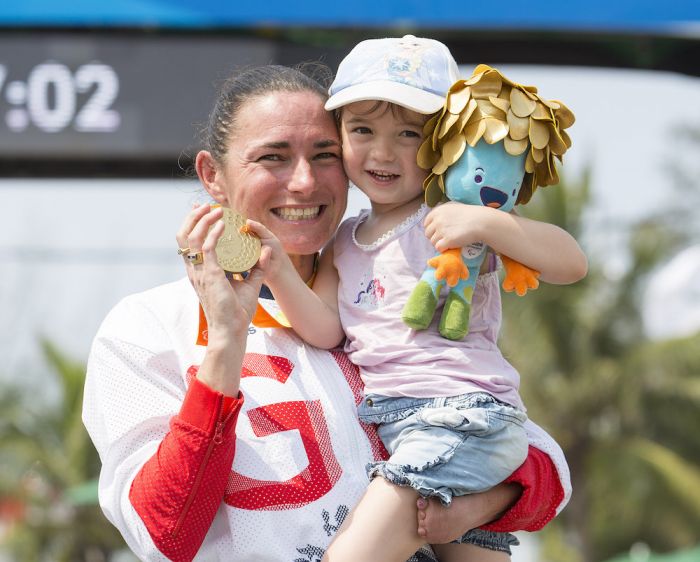 What’s been the highlight of your career to date?

That’s a very hard question but I would probably say winning in Rio with Louisa there and jumping the fence to see me after the medal ceremonies. I loved the home crowd of London but nothing beats sharing your finest sporting moments with your kids!

You’ve been active in disability sport for over two decades. How much have things changed within para-sport in that time?

There’s been a huge amount of change in para-sport with the most noticeable being the investment from UK Sport and the funding system this has brought. Individual athletes are now funded on a par with their able-bodied colleagues which was never the case when athletes relied on external sponsorship. Coverage of the Paralympic Games is completely different, and once every four years para-sport received the spotlight it deserves. Outside of this the development of coverage has been slower in many sports and in cycling it is non-existent between Games.

What would you say to our readers who are interested in giving cycling a go?

Find a local club and enquire about how to get on a bike. If you already have a bike and you need some adaptations, then visit a local bike shop. There are local bike shops all over the country and they need our support or they will disappear – they are also run by cycling enthusiasts and people with great knowledge of our sport. If they don’t have the expertise you need they will hopefully be able to point you in the right direction!

Keep an eye on the Team Storey Sport site at www.teamstoreysport.com for updates from Sarah and Barney.

Time to get MND-SMART with breakthrough trials

Disabled racer Fincham up and running – on his dad’s bike