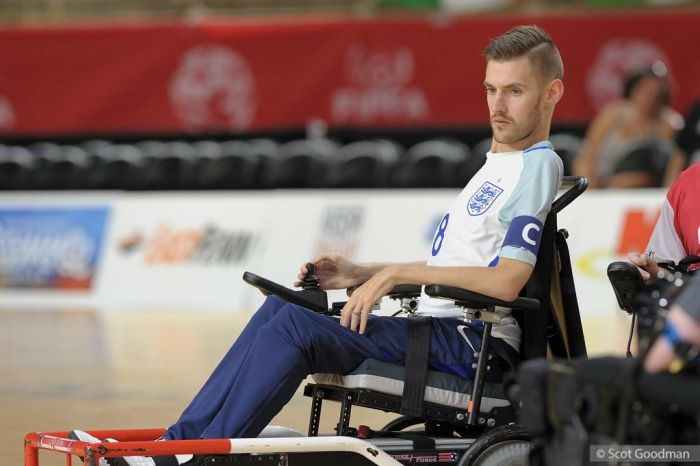 As a Can Do Sport supporter, a campaign run by disability charity Leonard Cheshire, Jon has captained the England powerchair football team to the semi-finals or better at two consecutive World Cups.

Powerchair football is gaining great traction in the sporting world. Using electric wheelchairs specially designed for the sport, there are championships, matches, rival teams and even a World Cup event, alongside thousands of supporters of powerchair football.

It’s the beautiful game like you’ve never seen it before. During the last World Cup, Jon helped guide his team to the semis in a tournament eventually won by France. England were lauded for the style of their play and their positive approach to the game.

Jon explains: “The World Cup was one of the best experiences of my life. The squad we had is something I will never forget. We did well to get to the semi- finals and we’re happy with some of our performances. We know deep down we should have done better and at least reached the final. But we came away with things to work on. And the way we played gives everyone hope for the future.”

Describing the sport as “football played on a basketball-sized court,” each powerchair football team has a maximum of four players playing at any one time, and a squad of eight for each match.

The sport uses a specifically designed ball that is 33cm in diameter. Players have guards on their chairs and they pass or shoot with a spin-kick, and strike the ball using the guard. It is as thrilling to watch as it is playing.

Jon adds: “I get enjoyment and competitiveness that I never had before powerchair football. The fast pace and skill make the sport so exciting to be part of. It’s a great sport to be part of both from a social side and a competitive side.

“It’s the closest thing to football for a powerchair user. I would encourage anyone – regardless of whether you enjoy football or not – to come and give it a go.”

Designed for people who use electric wheelchairs, male and female players have varied abilities and conditions from cerebral palsy or muscle conditions such as muscular dystrophy. Like many disability sports, there is a classification system in place during matches for players with moderate to severe disabilities.

Even if powerchair football isn’t the game or sport for you, there are many more accessible sports to get involved with. And accessing sport shouldn’t be a challenge – that’s where Can Do Sport can help. So, what are you waiting for?