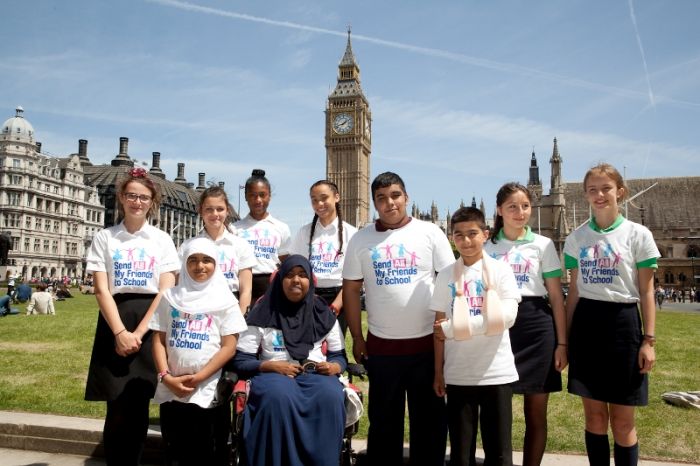 The young campaigners outside the Houses of Parliament (PHOTO: Georgie Scott)

Young people travelled to Westminster this week [Tuesday 17th June] to find out what the UK government is doing to make sure that every child worldwide, regardless of their disability, gets a chance to go to school. Accompanied by the TV Presenter and Paralympian, Ade Adepitan, they then delivered hundreds of colourful messages to No.10 Downing Street.

The ten young people represented the thousands of young people across the UK who care deeply about education for all and in particular children with disabilities and are taking part in this year’s Send ALL My Friends to School campaign. Schoolchildren in almost 4,000 schools have been learning about the barriers to education in class and then adding their colourful messages to ‘buddies’ to speak out for the right of every child to have a quality education. 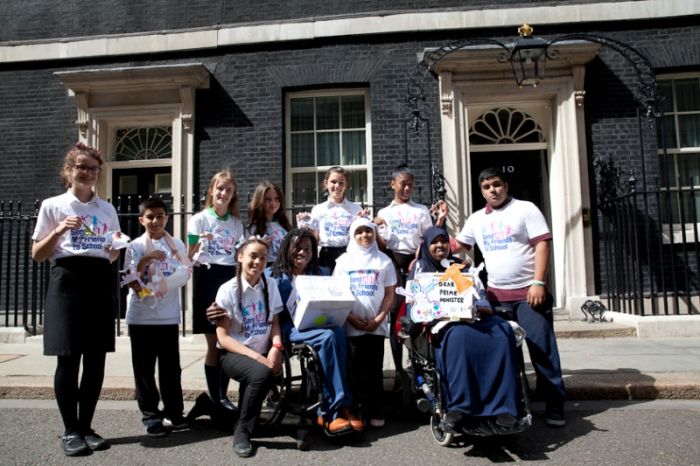 Ade and the campaigners outside Number 10 (PHOTO: Georgie Scott)

In 2000, as part of the Millennium Development Goals, world leaders promised that every child would receive a quality education by 2015. Since then the numbers of children out of school has halved, but there are still 57 million children missing out on school and over a third of them have a disability.

The young people met with David Blunkett MP, a great advocate on education for all and member of the All Party Parliamentary Group (APPG) on Global Education for All. David told them about the difference education has made to his life and how he, and other MPs, can take their messages into parliament and make them count.

David Blunkett MP told the young people: “I’ve done all sorts of things in my career that I’m proud of in terms of changing policy…but one of the biggest things I’ve done is just to prove to people, to youngsters who have a disability, to parents, to employers who are thinking I’m not going to interview this person, just by doing the job and being in the public eye to tell people that it can be done and that you must treat people as an individual, that’s probably the biggest thing I’ve been able to do. But education is key to that.” 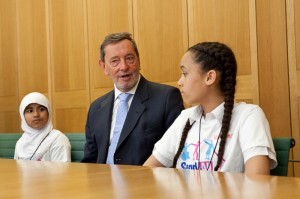 They also had a private meeting with education advisers at the Department of International Development (DfID) in Whitehall where they challenged them on what steps the UK government is taking to ensure universal primary education up to and beyond 2015, and in particular for children with disabilities.

Finally together with Ade Adepitan they entered Downing Street and delivered hundreds of colourful buddy figures to the Prime Minister asking world leaders to live up to the promise made in 2000 for universal primary education and to ensure that no child is left behind.

Ade Adepitan is supporting the campaign and says:  “If world leaders are serious about getting EVERY child into education, they must prioritise the needs of children with disabilities now.”

Ade was born in Nigeria where he contracted polio at 15 months old. Ade moved to London before he started primary school but knows that if he had stayed in Nigeria his life would have been very different. Nigeria is the country with the largest number of out of school children currently at over 10 million.

Maisie Le Masurier, 15, one of the 2014 Young Ambassadors said: “The highlight for me was meeting David Blunkett MP and hearing how with the help of his education he has been able to overcome his disability and have a successful and important career. This demonstrates how vital education is and inspires me even more to campaign for the 24 million children with disabilities that are still missing out on school.”

Rebecca Unwin, 15, also a Young Ambassador for the campaign and a pupil at Guildford County School said: “Going into Downing Street with Ade Adepitan was the best part for me. As Ade had polio when he was a child he can really relate to the problem of the millions of children in the developing world that cant get to school. He is a fantastic Ambassador for Send My Friend and it was great to have him campaigning with us.”

Almost half a million pupils in 4,000 UK schools are speaking out for every child’s right to go to school. A free DVD and pack is available for schools wishing to take part at www.sendmyfriend.org

Did the Paralympics affect public perceptions of disability?