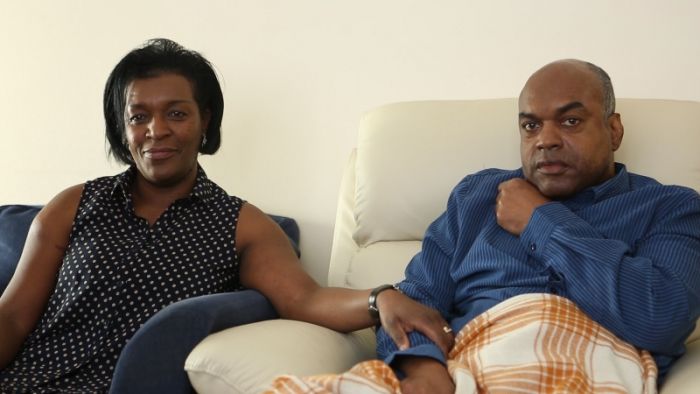 A man diagnosed with early onset dementia at the age of just 51 is enjoying the health benefits of a new wetroom donated by Impey Cares.

Taking a shower had become a daily struggle for Paul Davis and his wife Evadney because of a condition called Dementia with Lewy Bodies (DLB), which causes sufferers to develop symptoms associated with Parkinson’s disease as well as the problems related to dementia such as a decline in thinking, reasoning and independent function.

It means not only does Paul suffer severe stiffness in his legs, he is also often confused and uncommunicative – both of which made showering a huge challenge.

But now Evadney and Paul are enjoying the benefits of the new wetroom provided by Impey Showers as part of its Impey Cares scheme. The level-access shower and shower chair is massively reducing the stress of the daily task.

Evadney said: “The groundfloor wetroom is a huge boost to Paul’s quality of life.

“Having a shower each morning can now be the pleasure it should be. The water refreshes him, stimulates him, and makes him more alert and lucid. Afterwards, he is often the best he is all day. It also helps relax and soothe the muscles in his back, neck and legs which are so stiff.”

Impey Showers, the leading wetroom suppliers, set up Impey Cares in 2012 to represent the interests of vulnerable, disabled and elderly people, and raise awareness of the increasingly difficult situation following the government’s austerity measures which have resulted in funding cuts.

The scheme offers wetroom adaptations to those who have been refused funding through a Disabled Facilities Grant. The company has committed to continue Impey Cares into 2013 – fitting one wetroom each quarter – because of the huge number of people they discovered living without adequate wetroom facilities.

Evadney and Paul, both 56 and from Harrow, north west London, are the latest family to benefit.

Evadney, whose life was turned upside down when Paul received the official diagnosis from University College London Hospital in the summer of 2008, said: “Before the wetroom, the carer and I really struggled to get Paul into the bath.

“He can be very slow to get going in the morning and often he doesn’t understand what you are asking him to do. We’d often have to try and physically lift him into the bath – which is particularly hard because his body is so rigid and tense.”

Evadney knew a wetroom would improve the situation, but when she applied for a Disabled

Facilities Grant was told she would have to pay out an incredible £103,000 towards any project – far more than the adaptation would cost anyway.

Mrs Davis, a contract officer at a London council said: “Because I still work full-time – fitting my hours in around Paul’s care needs – this is the figure they came back with from the means-tested assessment.

“I can’t see the logic of it – if I had that kind of money available I would buy a bungalow. As it is, we still have the mortgage to pay and I am obviously the only one working. We didn’t have spare money for a wetroom.” 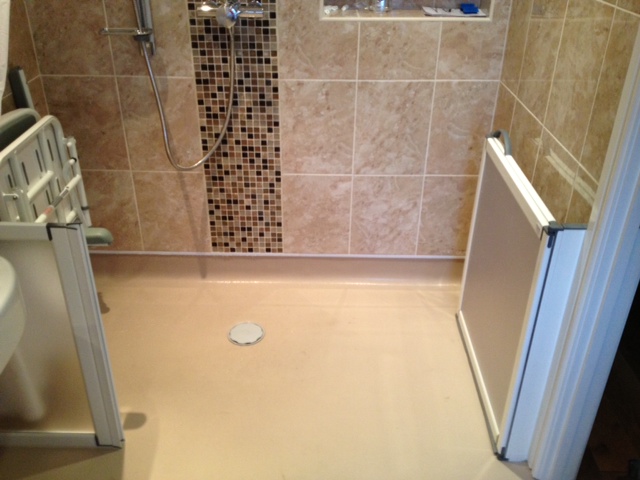 Evadney, a mum-of-two and grandma-of-two, said the news they had been picked felt like ‘a little bit of luck at last’.

“The past few years have been incredibly hard,” she said.

“Just as Paul and I were looking forward to a new chapter of our lives together, with the children grown up and left home, this came and turned our lives upside down.

“His condition has deteriorated progressively since the diagnosis. Some days now he doesn’t know who I am which is very sad and very hard to cope with.

“But he needs me know more than ever before – I am loving him more than ever, and looking after him in the best way I can. Part of that for me is making sure he lives with dignity and has a shower each day like he always used to.

“We want to say a big thank you to all the staff at Impey Showers who made this possible – they’ve made our dream come true. I think Impey Cares is a fantastic scheme, which is providing something so vital which many people take for granted.”

Occupational therapist Clare, who worked with Impey to develop a downstairs wetroom best suited to Paul’s needs, agreed, and added: “The Impey Cares scheme to provide wetrooms for those with mobility problems is outstanding.

“There are so many people who need adequate bathroom facilities to enable them to shower independently or more easily. Independence relating to personal care is such an important consideration for a person.”

Alex Longden, Marketing Manager at Impey Showers, said everyone at the firm had been touched by the Davis’ story.

“We are thrilled with the difference the new wetroom is now making to their lives,” he said.

“Independent living is a basic human right, and we look forward to helping more people experience the life-changing difference a wetroom can bring.”

Nominations are now being invited for Impey Cares adaptations to be carried out in 2013.

Applications are invited from those with a mobility problem or disability who have no financial means to adapt their own bathrooms, their carers, or their representatives from schools, charities and other not-for-profit organisations.

Follow the Impey Cares campaign online: tweet @impeycares; ‘Like’ the project on Facebook.com/impeycares; and visit www.impeycare.co.uk to watch video interviews with those who have received a wetroom adaptation and to nominate someone in need.

Hampshire military man gets a helping hand from Impey Cares