Great Britain’s wheelchair curling medals may no longer be a reality but the team did themselves, and Britain, proud. We caught up with team member, Angie Malone MBE about the hard work and dedication needed to get to the PyeongChang 2018 Paralympic Winter Games. 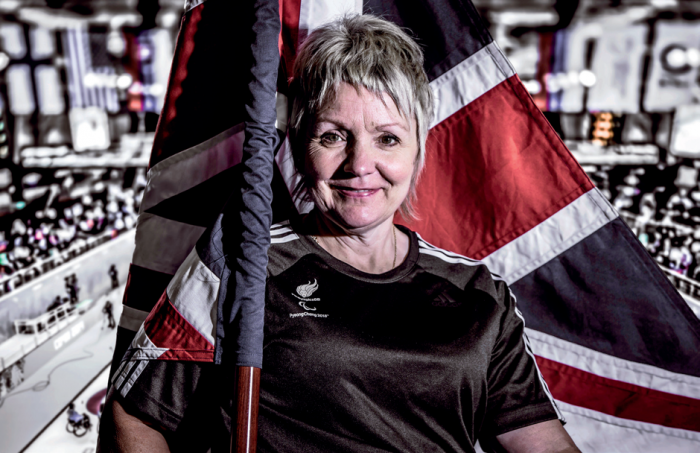 A former full-time mum, Angie Malone didn’t plan on having one of wheelchair curling’s most successful careers. In only 15 years, Angie has represented Great Britain in two Paralympic Games, taking home bronze and silver, and has won gold, silver, and bronze medals from numerous World Curling Championships. In 2017, she received one of the country’s top honours: an MBE in the Queen’s Birthday Honours List for services to wheelchair curling.

During the Winter Games, Angie represented her country alongside Aileen Neilson MBE, Gregor Ewan, Robert McPherson, and Hugh Nibloe, who together made up the 2018 wheelchair curling team.

What did it feel like to be selected for the PyeongChang 2018 Paralympic Winter Games?

Really exciting! This was my fourth Winter Paralympic Games so for me to be selected to go out to PyeongChang in 2018, it was really the pinnacle of my career. We’ve been working hard all season with a great squad of six players and the five of us that have been selected to go out.

Wheelchair curling is a relatively new addition to the Winter Games – it was first introduced to the Paralympics in 2006 at the Games in Turin, Italy. How does it feel to be a pioneering athlete of the sport?

I became involved with wheelchair curling in 2003, only a year after the sport started. I have a spinal injury from a road traffic accident when I was 16. One of my friends who I met in the hospital contacted me, asking me to try out. I was 37 at the time and so busy with my kids, and I said: “Jim, I’m so busy. I’ve got two teenage daughters and I’m at university trying to get my degree.” But he persevered and kept phoning me about it so I went along to the qualifiers at Braehead and was given the opportunity to try out. I was selected to play for Scotland in my first World Championships in 2003 where we won gold. So, for me, it’s been such an amazing curling career.

What were you most excited about for PyeongChang?

It was great to get out there and just get started to play that first game. I was looking forward to the competition starting, and meeting our competitors again. We know most of them now and we’ve made so many friends from many different nations over the years so it’s always really exciting to get out there and make new friends and see old friends again.

How can people get involved with wheelchair curling?

Wheelchair curling is open to all ages so if anybody wants to try wheelchair curling they only need to contact Try Curling (www.trycurling.com) to learn about curling and find out what curling rinks they can visit and try out like I did.

There is still a lot of sporting action to see before the closing ceremony on Sunday 18 March 2018. Catch all the action on Channel 4