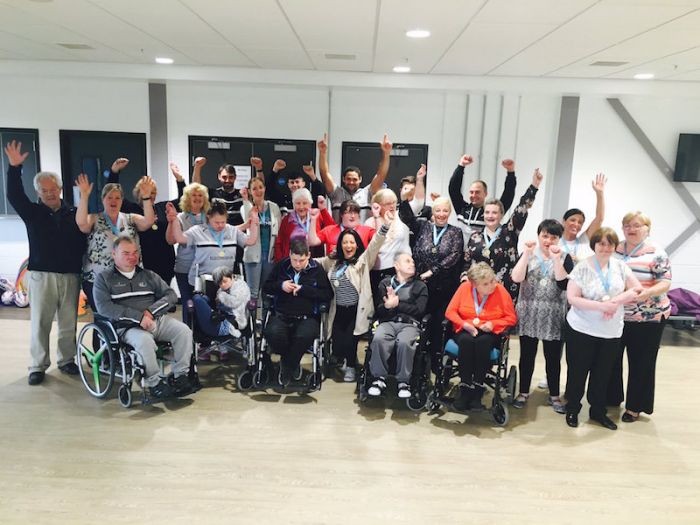 Widnes Vikings star player Hep Cahill hosted a unique sports festival for people with learning disabilities on Saturday 1st October, working with the charity Community Integrated Care. The event, which was inspired by the spirit of the Paralympics, saw participants raise money for a special community project that the rugby star has launched, which aims to fund new public exercise parks in Halton.

Taking place at the Frank Myler pavilion in Widnes, the event was named the ‘Hep-tathlon’ in honour of the player. Working with Hep and coaches from the club, people supported by the charity took part in seven creative and accessible Olympics-themed sports sessions, inspired by the likes of athletics, shot put and rugby. They raised £500 for the community project.

Following the event, Hep presented medals to every participant and spent time with them, taking photos and signing autographs.

This festival was the latest development in the pioneering partnership between Widnes Vikings and Community Integrated Care. Participants at the event also enjoy taking part in accessible sports sessions with the club’s community coaches twice a week. They have had some incredible experiences with the club this year, such as leading players out at a Widnes Vikings match and getting up close with the Super League trophy.

Cahill is one of the Vikings’ key players, having starred for the club since 2012, and is well known for his commitment to supporting local community and charity projects.

Community Integrated Care is one of the UK’s largest and most successful health and social care charities, supporting thousands of people across England and Scotland with learning disabilities, mental health concerns, autism and dementia. The charity was founded in Widnes in 1988.

Hep Cahill, says: “I loved taking part in the Hep-tathalon and meeting everyone. It was a really fun day and we all had a great time getting involved in the activities together. The players have really developed a fantastic relationship with the people supported at Community Integrated Care this season, and it was special to give them another great experience at this event.”

He adds: “It’s was honour that they chose to support my campaign and help with my fundraising efforts. The £500 they raised will really make a big difference.”

Karen Hayes, Community Integrated Care Service Leader, says: “This year we’ve had an amazing experience working with Widnes Vikings and the players, so we wanted to finish the season on a high by giving back to the club that has given us so much. When we found out about Hep’s fundraising plans, we wanted to do something special to help out. This fantastic event gave people we support another wonderful experience, and helped a great cause. I’m so proud of everyone raising this £500.”

Fans and members of the local community can still sponsor participants, by visiting: uk.virginmoneygiving.com/team/heptathlon.