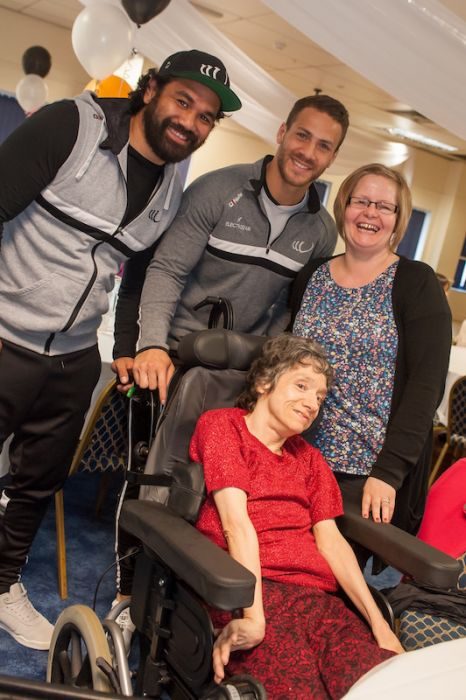 Super League team, Widnes Vikings, and national social care charity Community Integrated Care, are proud to announce one of Britain’s most ambitious partnerships between a professional sports team and a care provider.

The two Halton-based organisations will work together to deliver a pioneering long-term programme that promotes the health, wellbeing and happiness of people supported by the charity, its colleagues, and the wider local community.

This partnership was launched to over 100 supported by Community Integrated Care and its colleagues on 10th of May, at an exclusive event that was attended by star players Patrick Ah Van, Lloyd White, Tom Gilmore and Ed Chamberlain. The charity will also be guests of honour at the upcoming Super League game against Huddersfield on 29th May.

Community Integrated Care is one of Britain’s biggest health and social care charities, supporting over 5000 people across England and Scotland who have learning disabilities, mental health concerns, autism, and age-related needs, such as dementia. The charity was founded in Widnes in 1988 and remains the biggest social care provider in Halton.

Widnes Vikings are one of the most successful Super League rugby clubs. Formed in 1875, the club has a proud history of winning top honours in the sport and remains a mainstay of rugby league’s elite league. The club has been nationally praised for its successful community engagement work.

This partnership will promote the wellbeing of both colleagues of and people supported by the charity, hosting a number of weekly healthy living and sports sessions for them. These sessions will be delivered by professional coaches, and will also feature appearances from the club’s star players. It will also promote people living well with dementia, with the Vikings delivering weekly activity and reminiscence sessions in Community Integrated Care’s specialist dementia care homes.

Widnes Vikings will also be working with Community Integrated Care, in its efforts to be a truly inclusive club. The charity will be delivering Dementia Friends and disability awareness training to every staff member at the club, including the first team, a landmark commitment from a professional sports team. The club is also creating voluntary positions for people with care and support needs, and will be encouraging its local partners to back this social inclusion effort.

The organisations have also committed to working together to make a difference in the wider community. They will be hosting a monthly ‘Chemics Cafe’, which will provide vital advice and support to people affected by dementia, as well as offer opportunities to socialise and reminisce about the game with legendary players. They will also be enabling people who access care and support services to follow their passion for the game.

John Hughes, Head of Communications and Marketing for Community Integrated Care, says: “Community Integrated Care and Widnes Vikings are two leading organisations that were formed in Halton and are at the heart of the local community. As the biggest care provider in the area and one of the borough’s biggest employers, we believe that this partnership has the potential to make an unparallelled social impact. We are thrilled that Widnes Vikings share our ambitions to deliver a programme that transforms lives. We believe that this is a sector leading partnership, and thank the club for their passion, ambition and commitment.”

Denis Betts, Head Coach of Widnes Vikings, says: “On behalf of all at Widnes Vikings, I would like to welcome staff and people supported by Community Integrated Care into the Vikings Family. As a club we love to engage with our community, and through this innovative partnership, the team and I look forward to seeing the projects in action and meeting all the participants”.

Find out more about Community Integrated Care at www.c-i-c.co.uk.