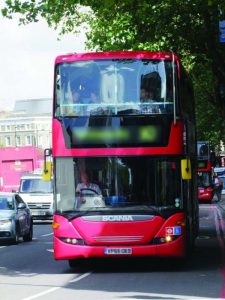 Wheelchair user fed up after being trapped 40 times on Arriva and London General’s buses.

Imagine pressing the bus bell when you want to exit, but instead of opening the door the driver keeps the doors closed and drives off with you still on board. This is exactly what happened to Chris Stapleton, a wheelchair user, on 40 occasions(1).

Stapleton has just raised his 40th complaint to Transport for London (TfL) after being once again ignored by a bus driver not letting him off the bus when he requested the wheelchair ramp.

All London buses have a blue button that wheelchair users can press in order to tell the driver that they want to get off and therefore need the ramp to be deployed. But many drivers aren’t paying enough attention to it.

Stapleton says “When the driver pulls away from the bus stop after ignoring my request, I normally shout ‘Stop the bus!! – I pressed the blue button!!’ Most drivers don’t give any sort of apology for failing to deploy the ramp earlier. Some drivers don’t even stop the bus, and I’m forced to get off at the next stop. This often messes up my plans to meet friends, and the stress and annoyance it causes can really spoil what would otherwise be a pleasant day out”.

London General (part of the Go-Ahead group) and Arriva are the worst offenders (with respectively 19 and 16 complaints) and the number of issues has increased over the last 2 years with 14 complaints raised in 2015 and 17 just in the period January-September 2016.

Transport for All (TfA), the charity organisation championing the rights of disabled and older people to travel in London(2), has raised concerns about this issues and is urging Transport for London to speed up the renewal of their training programme.

Transport for All Director, Faryal Velmi says “This is the tip of the iceberg. Transport for All receives regular complaints from disabled and older people facing the same situation. Many are so fed up with this that they’ve stopped reporting it. This adds to the stress that a journey can represent for many disabled and older people facing additional issues such as broken ramps or the wheelchair priority space occupied by buggy users.”

Chris Stapleton just wishes that London General and Arriva’s bus drivers would follow the procedure defined in the Big Red Book, a manual for bus drivers issued by TfL. TfL also deal with all complaints that are made about buses in London.

Stapleton says: “I’m really fed up with the bland responses I get from TfL when I send in complaints about this. I don’t want nice polite apologies: I want change, I want bus drivers to do their job properly, I want them to stop making my journeys stressful and upsetting”.

Transport for All is the organisation campaigning for the rights of disabled and older transport users in London. www.transportforall.org.uk / @transportforall