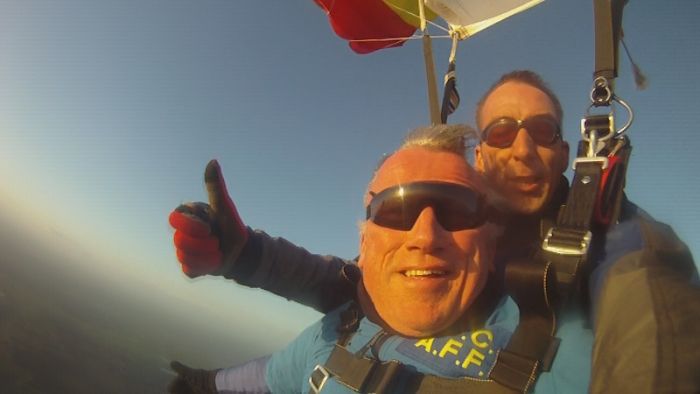 A disabled County Mayo man has undertaken a tandem skydive to raise money for his favourite charity, Mary’s Meals.

Brave Padraig Keogh took the plunge on Sunday (April 6) at Clonbullogue Airfield in Offaly (Irish Parachute Club), the day before his 45th birthday.

Padraig, who was born with spina bifida and uses a wheelchair, has dedicated much of his time over the past five years volunteering for Mary’s Meals, which runs school feeding projects in some of the world’s poorest countries.

The charity currently provides over 860,000 children with a daily meal in a place of learning, attracting them to the classroom where they receive education that could one day lift them out of poverty.

Padraig is hoping his fearless efforts will help to raise enough money to feed an entire school in Africa with Mary’s Meals for a whole school year.

The former orthopaedic technician says: “I was drawn to Mary’s Meals in particular because of its authenticity. It is run by people with a genuine desire to help others and most of the work is undertaken by volunteers.

“The small number of staff the charity does employ are given modest salaries and at least 93 cents of every Euro donated is spent directly on charitable activities.”

Padraig, who grew up in Blanchardstown and now lives in Mayo, added: “It’s pretty amazing to be part of something that makes such a difference to more than 860,000 children across the developing world. Put it this way—I would never have signed up to a skydive if it wasn’t for such a good cause.

“Until now, the most daring thing I’d done was go skiing using a sit-ski. Those things go pretty fast, but I don’t think anything can prepare you for jumping out of a plane.

“I thought it was going to be terrifying, but I didn’t have much time to panic as I was first to jump! What a rush—the freefall was quick, but the views were absolutely spectacular.

“My tandem partner, Ian, even spun us around a few times before he let the parachute out. The whole experience was very exciting, and I’m hopeful that I can raise enough to make a real difference to hungry children.”

As well as providing meals in school to encourage children to attend, the charity runs a complementary initiative called The Backpack Project, which allows supporters to donate backpacks filled with educational items to help children receiving Mary’s Meals to make the most of their time in school.

Padraig volunteers for Mary’s Meals by driving the length and breadth of the country picking up donated backpacks from schools, churches, community groups and individuals all over Ireland, using a modified van which was kindly donated by a local company.

It costs Mary’s Meals a global average of just €14.50 to feed a child for an entire school year. The charity recently opened an office in Ireland, following tremendous support from community fundraisers who have raised over €1.3 million so far to support the charity’s work.

Aoife Martin, Fundraising Co-ordinator for Mary’s Meals Ireland, said: “We are extremely grateful to Padraig for all his incredible efforts to support our work.

“By fundraising to raise enough money to feed an entire school for a year, he is helping us reach more of the world’s hungriest children, giving them food and hope so they can have a brighter future.

“The generosity and wonderful ways Padraig, and other supporters, find to support Mary’s Meals never ceases to amaze us. As a result of their kindness, the lives of thousands of the world’s poorest children will be transformed.”

Individuals, families and fundraising groups can get involved in raising money to feed a whole school in Malawi and Liberia, where Mary’s Meals have their largest projects.

The fundraising target is set depending on the number of children enrolled at a school. As well as receiving updates on how the pupils are progressing with their education, fundraisers will have words of their choice painted on a sign on the kitchen wall, which the children will see every day when they receive their life-changing meal.