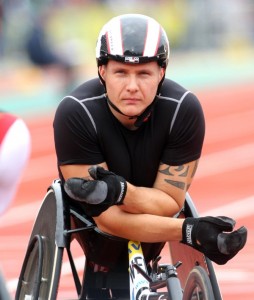 David Weir completed a remarkable London 2012 Paralympic Games by winning his fourth gold medal from four events as he stormed to victory in the Marathon today (Sunday).

And Shelly Woods followed him home in style with silver in the women’s Marathon, Britain’s last medal of London 2012.

Weir, who had already collected golds in the T54 800m, 1500m and 5000m, rounded off his London 2012 campaign a with a sprint finish along The Mall that left his opponents battling it out for silver and bronze.

Cheered on by a huge crowd, he came home in one hour 30 minutes and 20 seconds to beat Marcel Hug of Switzerland into second place by a second, with defending champion Kurt Fearnley of Australia taking bronze, also a second behind Weir.

“That was the toughest race I’ve ever raced in my life,” said Weir after crossing the finish line. “I was absolutely dying in the first five miles. I didn’t think I’d manage to cope with the heat. I felt flat and I had to dig deep.

“I had an energy shot just to keep going. That was meant for about 16 miles, not the first five miles.

“They were all working together to try to stop me, but I’m used to that, I just do my own thing and race the best I can,” he added.

“The crowd were just awesome, I’ve never seen that before for the whole race. When I couldn’t feel my push rims, they were getting me through. My whole body was tingling.

“I knew on the final stretch I had to dig deep. I didn’t know where the finishing line was, so I carried on pushing. I didn’t know how close they were behind me.

“I sprinted as hard as I could. I thought I went too early, but my arms didn’t feel tired. I had a sneaky look back and there was a good two chair-lengths back.

“I knew I had lots and lots of top speed. I knew on the final stretch I had to keep doing what I do in Richmond Park with the cyclists when I do a mile in under three minutes.”

Weir said he was pleased to strike gold in all four of his events at London 2012.

“I trained for all four events, but you can’t train for the emotions. I didn’t know how my body would feel this morning. I’ve never done so many races before.”

He added he was pleased to see the media attention the Paralympic Games has received.

“I’m honoured that on the front and the back pages Paralympic sport had got the recognition it should do. We’re super humans and phenomenal athletes.”

By the 10km mark in today’s race, the field was already starting to thin out, with six athletes mounting a breakaway. Two Japanese racers, Nobukazu Hanaoka and Kota Hokinoue were setting the early pace, going through in 20 minutes 50 seconds with Fearnley, Weir, Poland’s Tomasz Hamerlak and Hug all in the leading pack having opened up a 16-second gap over the rest of the field.

The leaders went through the Half Marathon mark in 44:11 with the same six still in a pack covered by two seconds.

By 30km another third Japanese racer, Masazumi Soejima, had worked his way up to the leaders to make it a group of seven. He had been than 30 seconds off the front at the halfway mark.

Weir was in a group of three who broke away after 30km – he was joined by Hug and Fearnley. But the trio of Japanese racers put in a concerted effort to work their way back into the leading group, although Hokinoue had drifted off the lead by 40km.

Soejima and Weir were now side-by-side at the front of the field, with Fearnley, Hug and Hanaoka still in the leading group as they approached the finish.

Weir made his decisive break in The Mall. Hug and Fearnley tried to chase him down, but it was Londoner Weir who took that historic fourth gold medal.

Woods wasn’t far behind him, racing to silver in the women’s Marathon, which started minutes after the men’s race. She crossed the line in 1:46:34, a second behind gold medallist Shirley Reilly of the USA.

It was a terrific finish for Woods, who just missed out on a Marathon medal in Beijing four years ago, coming fourth, and didn’t win a medal on the track in the Olympic Stadium.

Woods, from Lytham St Annes, said: “I can’t describe how great it feels. That was such a hard race, probably the hardest Marathon I’ve ever pushed in my life.

“It’s been such a tough week mentally. Physically my speed has been the best it’s been for the past few years, but the other girls were better tactically on the track.

“I still had the speed to sprint for the finish after 26 miles. It hurt, but all the hurt was worth it now.

“I wanted this so badly. I’ve been training for this for four years. To get a silver medal in London is amazing. It’s fantastic.”

Tatyana McFadden had opened up a 10-second gap at the 10km mark. She went through in 23:57, with Woods 11 seconds back in the chasing pack.

But just ahead of the 15km mark McFadden suffered a mechanical problem and needed to stop for a wheel change, putting her three minutes off the lead.

By the halfway mark Woods was among seven athletes in the leading group separated by three seconds. She was joined by Amanda McGrory of USA, Chris Dawes from AUS, Japan’s Wakako Tsuchida, and the Swiss pair Sandra Graf and Edith Wolf, as well as Reilly. Diane Roy of Canada was 1:44 back with McFadden looking out it, still three minutes from the leaders.

By 30km Dawes and Tsuchida had been dropped from the leading group and McFadden was now well off the pace.

Reilly led them through the 40km mark and won the sprint finish to take gold. But Woods had hung in there in the hardest race of her life to finish GB’s London 2012 campaign with silver.