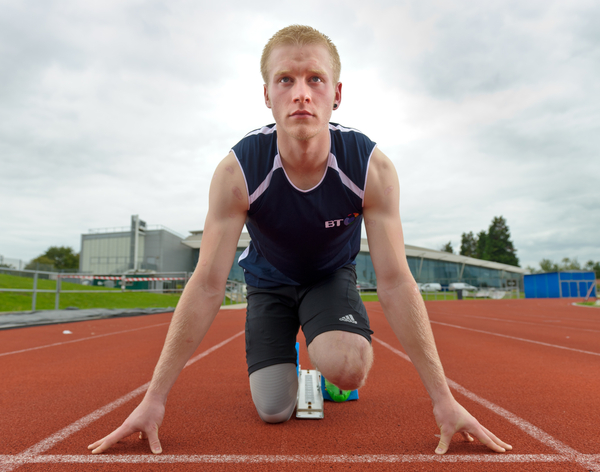 It had been billed as Thriller Thursday in the Olympic Stadium. And it didn’t disappoint.

It was Cockroft who started the ball rolling in what became a stunning night of Athletics.

The 20 year old from Halifax earned the right to be called the golden girl of British Paralympic Athletics with another astonishing performance to collect a magnificent sprint double in the Olympic Stadium.

Just hours after setting a Paralympic record of 33.20 seconds in this morning’s T34 200m heats, she slashed away at it again in the final with a new best of 31.90.

Cockroft had the race won by the halfway mark and powered home to complete an impressive double, adding the 200m gold to the one she won over 100m on Friday.

Melissa Nicholls, from Cheltenham, competing in her first Paralympic final, came home in seventh in 40.00.

Cockroft said: “I hit top speed there with a Paralympic record. I could have gone quicker with a world record but I can’t complain, the gold medal was what I wanted.

“This summer has been breathtaking, this is what all the training has been for,” she added. “It’s fair to say I was nervous, I’m always nervous. I’m really happy though.

“I hope we’re doing everyone proud; everyone’s excited and I don’t want this to ever end, it’s been amazing.”

An hour and a half later it was Weir’s chance to show he was the king of the stadium.

Weir had already performed remarkable heroics in the Olympic Stadium, winning gold in the T54 5000m on Sunday 2 September and following that up with the defence of his Beijing 1500m title on Tuesday.

He won his third gold in resounding style, although he was made to work hard over two laps – a comparative sprint for the Londoner. He stayed out of trouble for the opening 600m and then made his attack with 200m to go. But China’s Zhang Lixin refused to yield and the two raced side by side for what appeared to be an eternity.

Fittingly, alongside the London 2012 hoardings down the home straight, Weir got his man. He crossed the line in one minute 37.63 seconds with the Chinese athlete second, only to be disqualified later.

“That was hard work tonight,” said Weir. “I just had to dig deep. It was a strong field and you can’t underestimate anyone. I knew the Chinese guy had the best top speed of anyone tonight, so I knew if he was going to go out quickly I had to match is speed.

“This one was for the kids,” he added. “I’m tired now and I need to recover.”

He has three gold from three events and has the marathon to come on Sunday.

Before the crowd had time to draw breath, it was time for the one of the most eagerly anticipated races of the Games as Peacock lined up at the start of the 100m for a T44 100m final that included defending champion Pistorius.

Comfortably the youngest in the field, the 19 year old from Cambridgeshire ran a race of maturity that belied his years. Sprinting away from the blocks, he destroyed the field, leading from start to finish to shatter the Paralympic record of 11.08 seconds which he had equalled in the heats 24 hours earlier. Peacock crossed the line in 10.90.

Richard Browne of the USA was second, with Arnu Fourie of South Africa third and Pistorius fourth.

“It was absolutely surreal tonight. The crowd was absolutely immense. This Games is definitely a legacy and to be part of that is amazing,” said Peacock. “I was so proud to be British.

“I was really annoyed with my start yesterday in all honesty. This time I knew I could actually push and my drive phase was probably the best it’s been in a race. At 60m I thought ‘I’m in the lead, what’s going on’. It’s crazy. But I think I nailed it in that race.

“In all honesty I should have run quicker than that,” he added. “I should be going three-tenths faster. I’ve been running very quickly in training in the last two weeks and I haven’t put it out here.”

And there was a British medal in the field too, with Dan Greaves from Loughborough taking silver in the F44 Discus with a season’s best of 59.01 metres. He finished runner-up behind Jeremy Campbell of the USA, who set a Paralympic record of 60.05m to take gold.

Greaves has now competed at four successive Paralympic Games and has medalled at each one – his record reads silver, gold, bronze and now silver.

Earlier, Ben Rushgrove got the evening off to a great start by adding bronze in the T36 200m to the silver he won in the 100m in Beijing four years ago.

Team-mate Graeme Ballard, silver medallist in the 100m this time around, got out of the starting blocks quicker, but Bath’s Rushgrove ran a terrific bend to ease past him and started to chase down Ukraine’s Roman Pavlyk and So Wa Wai from Hong Kong.

The 24 year old Briton was closing all the time, but despite a personal best of 24.83, he couldn’t quite overhaul them.

Rushgrove said: “It’s very difficult to explain how I feel right now, I’ve had so many up and downs, but I think the easiest way to describe it now is relief.

“Now I’ve got my medal I can go out and celebrate what is an amazing achievement. I’m hugely privileged to have the opportunities I’ve had to pursue my dreams and see what comes of them.

“When you win your first Paralympic medal you enter quite an elite club of people already, but when you win two medals, that’s fantastic,” he added. “We’ve seen some people struggle in front of the home stadium, and maybe that happened to me a little bit in the 100m to be honest.

“The 100m was painful for me, I was in a situation where I wanted to win. I prepare very hard for Games like this and I prepare to win, not to lose. I still really like the idea of winning the 100m one day. The Paralympics is addictive and I want that buzz again.”

“Sport is one of those things, you win some, you lose some,” said Ballard. “In the middle I couldn’t find that extra gear. I’ll just go back to training. At the start of this if you said I’d leave with a medal, I’d have been pleased.”

Next up was another Bath-based runner – and another bronze for Great Britain. This time it was Paul Blake going in the T36 800m – two days after he collected silver in the T36 400m.

Blake, who lives in Dorchester and trains in Bath, looked comfortable from the start in a field that included three very good Russians. It was Evgenii Shvetcov that hit the front 400m out, but Blake held his ground and then attacked 100m later.

He opened up a gap, but the Shvetcov was still there and powered past the British runner 200m from home, followed by Artem Arefyecv.

Blake hung in there and came home in third place in two minutes 8.24 seconds – a time that would have earned gold four years ago. Shvetcov won gold this time around in a Paralympic record of 2:05.32 to complete a golden 100m, 400m and 800m hat-trick, with Arefyev taking silver in the personal best 2:06.13.

Blake said: “The race went exactly to plan, but I was a bit tired after the 400m on Tuesday night. I kicked early and he just caught up with me with 200m to go. I just went a bit too soon, the other guys kicked and I didn’t have enough in the tank.

“I knew the gold was gone at the 150 when Artem went past me as well, so I just held on for bronze and hoped that no-one was behind me.

“I’m really happy with a silver and a bronze. I’m just trying to get better and better and I’ve got plenty of time to improve.”

“I really enjoyed the crowd tonight, I’ve had amazing support,” he added. “It’s an honour to put the GB vest on every time, I’m really, really proud, and to come away from here with a medal has just topped it off.”

And there was a third bronze of the evening for Ola Abidogun from Bolton, in the T46 100m in 11.23 seconds, behind Zhao Xu of China and Raciel Gonzales Isidoria of Cuba.

“I’d say it was an average performance, my PB is quicker, but considering I’m only 19 and it’s a new experience and I’m happy,” he said. “Any medal is worth celebrating.

“The crowd around me made me feel comfortable, they spurred me on and helped me pull it back in the end.

“I’m pretty new on the squad and I’m still learning. If I’d got a better start I could have gone quicker but I was a bit nervous. It’s motivated me to get back into training now.”

In the T44 200m, Stef Reid, who trains in Loughborough, just missed out on the medals in fourth in a personal best time of 28.62. Sixteen year old Sophie Kamlish from Bath also ran a personal best of 29.08 for sixth.

In the T38 200m final Olivia Breen from Liphook in Hampshire, running in her second individual final of the Games at the tender age of 16, finished eighth in 30.22 seconds.

“I’ve done really well and the bronze medal in the relay was a highlight,” she said. “I’ve just enjoyed getting to finals and I’ve has so much support, it’s been amazing, I couldn’t ask for more and I’m really happy with how I’ve performed.

“Tonight I had a good start and bend but I tired a bit towards the end.”