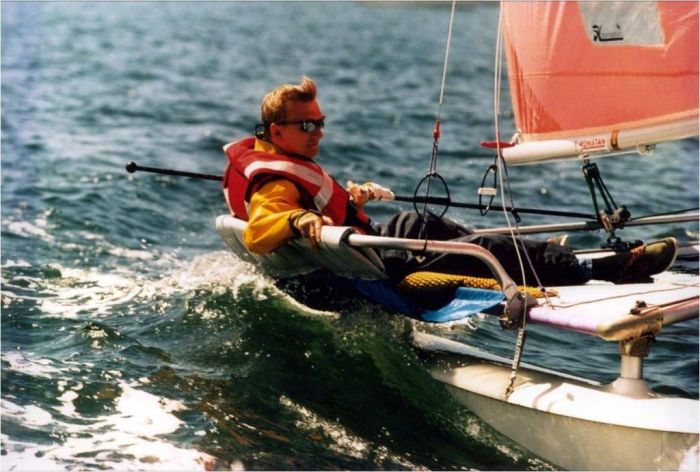 At 18 years old, Geoff Holt was already an accomplished yachtsman with a sparkling career ahead of him, but when he jumped into shallow seas and broke his neck, it looked like his dreams were over. Now, 25 years on, Geoff has defied the odds to become the first quadriplegic person to sail the Atlantic, earn himself an MBE and set up the UK’s first charity for disabled sailors. Rachael Fulton finds out more about his incredible life so far.

He’s broken world records, won Yachtsman Of The Year and been awarded an MBE, but 25 years ago Geoff Holt was lying on his back in Salisbury Spinal Unit coming to terms with his new life of quadriplegia. After a diving accident while working on charter boats
in the sun-soaked Caribbean, Geoff was flown home to face a future in which sailing seemed impossible.

“You’ve just got to accept there are things you can do and things you can’t,” says Geoff, who spent a year in Salisbury Hospital after his accident. “It’s absolutely pointless whingeing about what you can’t do. You have to look at your capabilities and secure objectives and goals. Small steps – metaphorically anyway.”

Sharing a ward with three boys of similar age and with similar injuries, Geoff slowly came to terms with being paralysed from the chest down. He didn’t waste his time in Salisbury and the young sailor managed to charm his nurse, Elaine, into leaving hospital with him once his treatment was complete. Elaine has provided Geoff with 24-hour-care ever since, and this year the couple celebrated their 25th wedding anniversary.

Upon leaving hospital, Geoff knew he wanted a career and that he had to re-train to be employable. At the time, computers were a relatively new phenomenon, and Geoff recognised their potential. He took the initiative to study a computer course and was taken on by finance company Deloitte, where he climbed the ranks until he was Head of Marketing for Southern England within five years. During that time, although Geoff was focussed on building a career for himself, his heart still belonged at sea.

“I realised I wanted to try and sail again, because I’d shut it out of my life for seven years,” says Geoff. “Before the accident, sailing wasn’t just a part of my life – it was my life. Seven years later I decided I was mentally ready to try again. I was terrified because I’d never sailed as a disabled person.”

In a nearby town, his wife Elaine began caring for an elderly disabled woman
who remembered Geoff from before the accident. As a teenager, he had worked in a restaurant where Elaine’s new client was a regular visitor. Kind-hearted Geoff had carried the lady upstairs when she visited, something she never forgot. The lady struck up a friendship with the couple and bought Geoff his first accessible boat, a 15-foot dinghy called a Trimaran.

“You steer with the back of one hand and pull the rope in with your teeth to make it go faster,” explains Geoff. “I absolutely loved it. I looked back and saw my wheelchair on the pontoon, and it was almost as if I’d left my disability behind me. When I was on the boat I didn’t feel disabled. I realised then that this is what I wanted to do for the rest of my life. For the rest of my life I’m going to sail.”

After achieving so much himself, Geoff decided it was time to reach out to other aspiring sailors. In 1995, he set up the Royal Yachting Association Sailability charity, an organisation helping disabled people get out to sea. The charity has been hugely successful, even attracting the attention of Princess Anne, who is a Sailability patron. There were very few disabled sailors at the time, but last year the numbers had grown to 25,000 and there were 180 established Sailability clubs around the country. While Geoff is no longer involved with the charity’s work, he is immensely proud of what he and the charity’s staff and supporters have achieved.

“Many disabled people never experience sailing, but I’ve been part of making it happen,” says Geoff. “It was great to be a part of that whole movement and get disabled people out on the water.”

He didn’t stop there. When Diana Campbell, the woman who had gifted Geoff his first Trimaran dinghy, tragically passed away, Geoff committed himself to sail around Britain in her honour. In 2007, with a team of nine volunteers, Geoff began the voyage he called his “personal Everest”. 109 days later, Geoff’s little boat Free Thinker had sailed 1,500 miles around 51 British harbours.

“It was, without a doubt, one of the greatest things I’ve ever done in my life,” says Geoff. “Absolutely phenomenal. It just blew me away.”

After conquering this incredible challenge, Geoff was ready for something new. In his youth, he had sailed across the Atlantic ocean, a fantastic journey which he was keen to try again. In 2009, he found a wheelchair-accessible boat that could handle the journey and arranged for a carer to come with him to dress, feed and care for him when he had finished sailing for the day. The 3,000 mile, four-week expedition was not only physically demanding, but emotionally significant for Geoff. As part of the trip, he purposefully visited the beach where, 25 years earlier, he had dived into the sea and snapped his neck – the event that transformed his life forever.

“I made landfall at the beach where I broke my neck, I deliberately sailed back to that beach,” he says. “I dropped the anchor in the bay and thought, ‘You know what? You took away my ability to walk, but you didn’t take away my spirit or my determination. Here I am, 25 years after breaking my neck, paralysed from the chest down, turning up at this beach in a £2million yacht as its master and commander’.”

The Queen awarded Geoff an MBE for services to disabled sailing in 2010 and a month later he won the Yachting Journalists Association Pantaenius Yachtsman of the Year award, the highest accolade in British yachting. At the ceremony, he received a two-minute standing ovation from guests.

Despite achieving so much, Geoff isn’t ready to take a break just yet. These days, he regularly travels the world delivering keynote speeches at conferences, inspiring others to make the most of their lives.

He is also patron of the Southern Spinal Injuries Trust (SSIT), a charity dedicated to supporting people with spinal injuries. As one of Salisbury Spinal Unit’s first ever patients, Geoff knows all too well the importance of helping young people adjust to their new, life-changing circumstances. When Geoff was in hospital in 1987, there was very little support for patients and his parents had to bring their own TV from home for him to watch.

“When you’re in hospital for a year, it’s a long time to be lying on your back,” says Geoff. “I yearned to see sky, to have fresh air, to hear birds singing. Hospital can be lonely and depressing – you need an organisation like SSIT to come in and make things a little bit more bearable.”

SSIT take patients out into a sensory garden to experience the outdoors and provide important grants for people who need to pay for personal equipment or adjustments to their houses. On top of his ambassador role, Geoff runs chartered boat trips for disabled people on his specially designed boat, Wet Wheels, determined as ever to help disabled people experience the same joy that he has for life on water.

While one horrific second on a gorgeous Caribbean beach changed Geoff’s life forever, he’s shown strength, determination and incredible ambition in the years that have followed. While disability can be devastating, he’s proven that it needn’t stop you from doing the things you love and chasing your dreams. With the right attitude and support, you’d surprised by what you can achieve.

Geoff is a patron for the Southern Spinal Injuries Trust, a charity which not only helped him in his recovery, but works with many people with spinal cord injuries in the South and South West of England.

“When I first got back in that boat, I just loved it. It’s what I’ve always wanted to do,” he says with a smile. “The accident took that away from me, but now I’m back.”