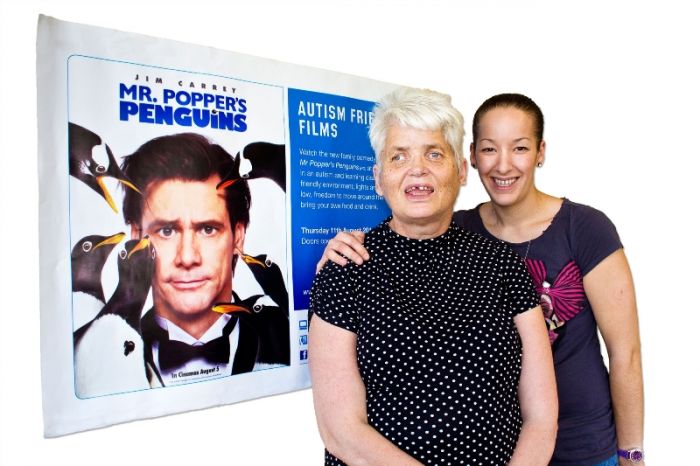 An initiative that has opened up the world of film to people who experience autism is to be rolled out across more cinemas in the UK due to the popularity of the project and the benefits it brings.

Dimensions, a national not-for-profit support provider for people with autism and learning disabilities, is pleased to announce that Vue Cinemas is pledging its support to the organisation’s  Autism Friendly Films initiative. Vue Cinemas will launch its autism friendly screenings on the 30 June, with subsequent monthly screenings happening on the last Sunday of each month. These screenings will be available at 78 Vue Cinemas nationwide.*

Vue is the third cinema chain to join the imitative, following ODEON and  Cineworld, making it the biggest scheme to specifically offer nationwide  Autism Friendly Film showings,  for which adjustments include eliminating adverts, lighting left on low and sound turned down.

During April, World Autism Awareness Month, Dimensions is celebrating the success of the project so far and how it has helped audience members. Since the initiative first launched with ODEON in August 2011, more than 38,000 visits have been made to Autism Friendly Film Screenings, currently offered in more than 90 ODEON cinemas and 21 Cineworld cinemas once a month.

Foster parent Andy Wood** has taken his 13-year-old foster son to ten Autism Friendly Film  screenings and has made a book about their visits for his son to remember the experience when he moves on in support services. “We have occasionally tried attending a mainstream screening but there are various difficulties with this. He tends to disturb other people’s viewing experience with noise and movement,” explains Andy.

“He has severe communication impairments but finds the length of an autism friendly screening tolerable for staying in his seat. The experience of a whole event around viewing a film has encouraged much more communication.  Having this opportunity has affirmed his enjoyment of film and gives him an outing that is clearly all about his preferences. We trust this boosts his self esteem and confidence.”

Andy says that the most helpful adjustments at the cinema as a carer are sympathetic staff and the knowledge that the family does not have to comply with the usual social rules of being in a cinema.

“As he is a child who is looked after in the care system, I am making a record of his life story. This is for him to look at over the years to help him to make sense of what has been happening. I hope it will also act as a communication tool for other people to share his life and interests.”

Lisa Hopkins, executive director of practice development at Dimensions, said it was brilliant to be able to lead the way with Autism Friendly Films. The project is an element of the organisation’s focus to provide more inclusive environments for people with autism.

“We are really pleased to be partnering with all three cinema chains to extend this important and successful project even further. The fact that the screenings have been so well received and continue to gain support from national cinema chains shows that there was a need to introduce such environments.

“People who can sometimes be excluded from the traditional cinema experience, because they may find the sensory experience too difficult to manage, are now able to watch a wider variety of films, more frequently, in an environment conducive with their needs. These opportunities are important stepping stones towards full inclusion in mainstream cinemas,” said Lisa.

A spokesperson for Vue Cinemas comments: “At Vue Cinemas we are dedicated to providing our customers with the best cinematic experience possible.  We are delighted to be part of this project as the autism friendly screenings will mean those who were previously unable to attend, can now witness films on the big screen, receiving the ultimate viewing experience specifically tailored to their needs.”

Dee Davison, Senior Policy Executive from the Cinema Exhibitors’ Association, said: “We are delighted that Dimensions is working with some of the UK’s largest cinema chains to support autism friendly screenings in cinemas.

“We strongly believe that the big screen is the best place to watch a film, and everyone should be able to enjoy that experience. By running autism friendly screenings cinemas they are able to provide more comfortable environments for those who find the traditional cinema setting not suitable for them.

“By turning the lights up and the sound down, programming films in advance and enabling people to move around the screen during a film – autism friendly screenings are a great way for those with autism and similar conditions to come to the cinema with their family and friends to relax and enjoy a film. The leading cinema chains in the UK programme these screenings monthly and we have been really pleased with the take up from audiences.”

Dimensions has recently conducted a survey into the likes and preferences of the people who attend the autism friendly screenings. Overall, the most popular films are those that appeal to a family audience, especially animation or family films.  People also said that the most important factor was proximity to their nearest participating cinema, something that Vue’s involvement will help address, as an increased number of cinemas will mean that more people will be closer to a local cinema.

Most of the people that responded attend screenings with their family members and more than half said they were very pleased with how well staff in cinemas were trained about autism and the cinema adjustments needed to give them a positive experience.

One parent responding to the survey said: “This is such a blessing to us, we could not go to any other screenings with our two boys, one of whom has Aspergers. This is something we look forward to every month and would welcome the chance to attend more frequently in any given month.”

Another said: “I just think the autism friendly screenings are fantastic, as my child can get quite anxious when waiting on a film to start so it is great that there is minimal or no trailers and the low volume makes viewing much better.”

Roger Harris, COO of ODEON & UCI Cinemas Group, commented: “We are delighted with the success of the Autism Friendly Screenings since they began in 2011. It’s great that ODEON can offer a cinema experience to people who wouldn’t normally find it easy. Watching a film on the big screen is a wonderful experience and one that should be accessible to everyone. Working with Dimensions has raised our awareness about the needs of people with autism.”

Matt Eyre, Vice President of Operations at Cineworld, said : “Cineworld is delighted to offer autism friendly screenings at selected cinemas and will soon be offering them across many more of our cinemas.  We’ve seen a very positive take up of these performances and with the support of Dimensions will be looking to continue and broaden them.”

Vue’s first Autism Friendly Film will take place on 30 June. Details of all the different films and locations for ODEON, Cineworld and Vue are announced on www.dimensions-uk.org/autismfilms each month.

* With the exception of Vue West End and Vue Piccadilly.

**The name of the parent has been changed to respect the identify of the child in foster care.

Bathrooms for the less able