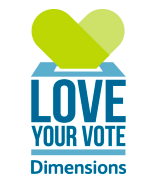 A campaign which has seen 750 people with learning disabilities attend workshops about politics has found that support workers need more guidance about the voting process.

The workshops run through Dimensions’ Love Your Vote campaign in partnership with the Houses of Parliament Outreach Service aim to educate and inform people with learning disabilities and autism about politics and voting. It is hoped the campaign will increase numbers of those who vote.

One issue highlighted through the campaign is that support workers often need to be educated and informed about politics too. This is with a focus on informing them that all people with learning disabilities can vote and educating them about the voting process.

Therefore, Dimensions and the Houses of Parliament Service have also used the workshops to explain to support workers how they can play a crucial part in the voting and engagement process. Some didn’t know that people they supported were entitled to vote.

Anastasia Jenkins, Public Affairs Officer at Dimensions, leads on the campaign. She said: “The workshops have been really well received because they are practical, interactive sessions that equip people with all the information they need about what happens in the political process. People learn about how to make laws in Parliament – even discussing what laws they would introduce – and why being involved and having a voice in politics is important.

Love Your Vote was launched in October 2013 after Dimensions, a national support provider to more than 3,500 people with learning disabilities and autism, found that less than 10 per cent of people it supports had voted in the previous election.

So far, more than 40 workshops attended by around 750 people have been held, with about 20 different learning disability organisations involving the people they support. Many people supported by Dimensions have also attended. Workshops are still available and can be directly booked for groups.

In the last few months, as part of the campaign, ‘Ask Your Question’ sessions have been held across the country. This is where MPs have met people Dimensions supports, so they can directly ask about issues that affect them.

Steve Scown, Chief Executive of Dimensions, said: “It’s great to see how many people have benefitted from this campaign already and to see what a difference it is making to them. People with learning disabilities need to be heard and to be part of their community. Part of that is ensuring they know how they can participate in society and in the democratic process.

“To be able to educate people in this way is really inspiring and I look forward to the next stages of the campaign.”

For information on hosting a Love Your Vote workshop, email loveyourvote@dimensions-uk.org or follow us on twitter @DimensionsUk #loveyourvote

Dimensions is a leading specialist not-for-profit provider of support for people with learning disabilities and/ or autism. It supports more than 3,500 people in England and Wales. For more information visit www.dimensions-uk.org