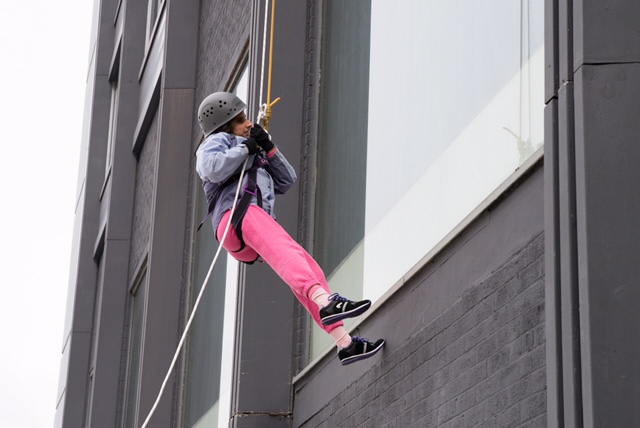 A group of visually impaired people took a courageous step in aid of a Birmingham charity for the blind – by abseiling almost 200 ft from the roof of a landmark city centre building.

Blind and partially sighted service users at Focus Birmingham in Harborne were among more than 30 adventurers who abseiled down the Holiday Inn Express Birmingham in Snow Hill Plaza on Saturday (October 10).

Focus, which offers support to the 29,000 visually impaired people in Birmingham, organised the Charity Extreme Abseil event as part of World Sight Day.

Registration for the event was £20, with each abseiler having to raise a minimum of £150 each in sponsorship.

The first person to abseil from the hotel roof was visually impaired Focus service user Wayne Jordan, 45, from Erdington who enjoyed it so much that he did it again.

Wayne, who was diagnosed with a rare form of eye cancer as a baby, said: “The adrenaline buzz was excellent so I immediately asked to go down a second time.”

Also taking part was Jenna Mistry, 31, who has been visually impaired since birth.

She commented: “It was scary. I kept losing the wall because it was difficult to see where it was, but I did find it again. I kept saying I was nearly there to help me get down.”

Another visually impaired participant was Steve Keith, 44, from Selly Oak, who has been blind since his teens after being born with glaucoma.

Steve said: “I like things that give you a bit of an adrenaline rush. It was fine and really enjoyable. It’s neither here nor there in terms of whether you can see or not. There’s nothing wrong with the coming down as long as you don’t have a hard landing.”

Among the participants were teams from JD Sports and Birmingham accountancy firm Baker Tilly.

Rachael Moloney, 25, a business development executive at Baker Tilly, was one of six staff members to complete the descent.

She said after getting down: “It was really good and not as scary as I thought it would be. The worst part was when you first step over, but I looked down so my advice is don’t.”

Focus Birmingham volunteer Debbie Peach, who was the second person to make the descent, said: “It’s really exhilarating apart from that split second when the instructor says lean back in the harness.

And Sophie Bissell, 24, a trainee medical physicist, commented: “It was fun but terrifying. When I was at the top I thought ‘why am I doing this?’, but Focus is a great cause.”

The all-day event was supervised by Ackers Adventure, based in Sparkbrook, who provided instructors and equipment.

Focus Birmingham Marketing and Fundraising Manager Jasmin Rana said: “We are really pleased that so many people faced their fear and took on our abseil to help visually impaired people and those with multiple disabilities in the West Midlands.

“All monies raised from the abseil will be spent on vital services for those facing sight loss.

“The support of people in Birmingham is vital, particularly as the number of people living with low vision is expected to increase significantly over the coming years.

“Sight loss not only causes practical difficulties, but also often leads to poverty, isolation and depression.”