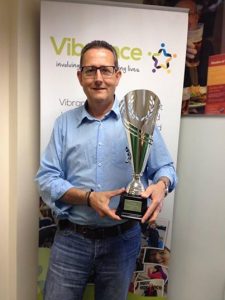 A leading social care charity in London and the South East is kicking off a year of celebrations to commemorate its 25th anniversary.

To commemorate 25 years of involving people and inspiring lives, a Vibrance anniversary trophy will tour across all services over the next year to celebrate their achievements. Each service will hold the trophy for two weeks, before passing it on to the next service to start their celebrations. Events already planned include tea parties, a trip to the seaside and a memory poster bringing together friends, families, service users and the local community.

To kick start the celebrations, Vibrance is holding a celebratory party, ‘The Only Way Is Vibrance’, to bring all service users together to celebrate at the Eclipse nightclub in Brentwood on 19th October 2014.

Since 1989, Vibrance, formerly known as RCHL, has gained a reputation for providing high quality services with service users at the heart of the charity, for having values that do no compromise, and for meaningfully involving service users in decision making at all levels within the organisation.

Paul Allen, Chief Executive of Vibrance said: “It’s very exciting to be celebrating our 25th anniversary with a year packed full of events, bringing each service together to celebrate within their communities.

“I can’t wait to see what the next 25 years has in store for us – the world of social care is changing, from one where services were commissioned via large block contracts that only allow very limited choice to the people using them, to one where those eligible for social care funding have their own individual budget in order to choose and adapt their care.

“At Vibrance, we’re welcoming that change. It’s a perfect match to our ethos of enabling people who use our services to have real control over their lives.

“Looking to the future, our goal is that by 2020, we will be driven forward by the wishes of the people who choose our services. We want to expand and diversify throughout London and the south east of England and we want Vibrance to become widely recognised for excellence in enabling vulnerable people to be in control of their lives.

“I would like to take this opportunity to say thank you to everyone who has been involved in Vibrance since we started, enabling our ethos and key values to grow and expand into new exciting areas.

“Without the hard work of both staff and service users we wouldn’t be where we are today, so here’s to the next 25 years – Lets ‘Vibrance It’ with hard work and innovation.”

The organisation employs around 400 people and was named in The Sunday Times ‘100 Best Companies To Work For’ in 2012.

Vibrance provides a wide range of social care and support services across London and the south east – all designed to enable people with a range of disabilities to have a greater voice and presence in their community. Find out more at www.vibrance.org.uk

Diabetes nurses are gearing up for charity cycle