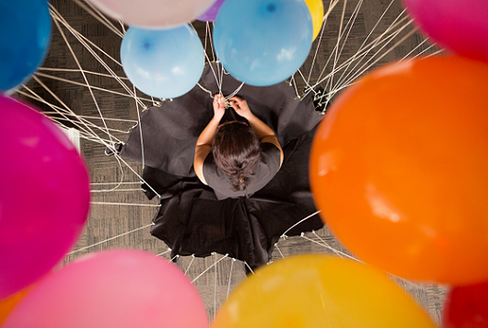 UNLIMITED today announced nine new commissions spanning a wide range of disciplines by some of the most talented and ambitious disabled artists from all over the UK.

A dark comedy about life and death, a sound installation exploring homeless culture, a story about the rise and fall of British capitalism and being lifted by 20,000 helium filled party balloons are among Unlimited’s most adventurous commissions yet.

Funded by Arts Council England, Creative Scotland, Spirit of 2012 and Arts Council of Wales, and delivered by Shape Arts and Artsadmin, Unlimited will provide over £500,000 as well as mentoring support to the nine artists whose commissions were unveiled at Chapter Arts Centre in Cardiff and simultaneously online.

The awarded works were chosen by 11 panellists including high profile disabled artists and individuals from British Council, Southbank Centre and Tramway. The panel was chaired by Ruth Gould, Artistic Director for DaDaFest.

On announcing the new awards, Jo Verrent, Senior Producer, Unlimited said: “This round of work will be astonishing. The selection process was extraordinarily difficult with so many high quality, incredible applications – we could have spent four times the amount. The commissions are diverse in every way possible – art form, ambition, take on the world – just showing that disabled artists and disability-led companies truly can’t be categorised into just one box. Watch out!”

Awarded artist Aaron Williamson said: “Unlimited recognises that artists thrive when trusted to be ambitious, and this project would not even have been imagined, let alone made possible, without Unlimited’s integrated approach to artist development. We are extremely proud to be included in Unlimited’s programme of critically rigorous, innovative, and uncompromising disabled-led work”

The new commissions are:

Assisted Suicide the Musical – Liz Carr (England)
Assisted Suicide the Musical will be a theatrical extravaganza that takes a joyously irreverent, hilarious and musical look at being assisted to die. Whilst the majority of the UK population believe it’s a humane choice to legalise assisted suicide for terminally ill / disabled people, Liz, and many other disabled people, disagree.
Producer: David Duchin

Cherophobia – Noëmi Lakmaier (England)
Cherophobia is a durational 48-hour living-installation by Artist Noëmi Lakmaier working in collaboration with world-renowned rope suspension expert Michael Wüst. It is a live attempt to lift the artist’s tied and immobilized body off the ground by the force of approximately 20,000 helium filled party balloons.
Producer: Rachel Anderson

Demonstrating the World – Aaron Williamson (England)
Demonstrating the World is a new outdoor public performance intervention that interrogates the notion of the ‘alien’ or ‘other’ through an absurdly elaborate live reinterpretation of mundane YouTube ‘how-to’ videos. The performance will be delivered to live audiences from a customised box truck containing a unique fold-away domestic interior.
Producer: Edd Hobbs

The Doorways Project – Bekki Perriman (England)
The Doorways Project is a touring, site responsive sound installation, exploring homeless culture through personal stories told by society’s most silenced people. Inspired by the artist’s own experience of life on the streets, the project uses a direct and unsentimental approach to investigating the personal, social and political dimensions of homelessness, considering public attitudes to disability and the role of art in making the invisible present.
Producer: Shiri Shalmy

Grandad and the Machine – Jack Dean (England)
Grandad and the Machine is a literature piece inspired by Ted Hughes’ The Iron Man, looking at the rise and fall of British capitalism through the lens of an accessible modern fairy tale. The story will take place in an alternate present where the British Empire never died.
Producer: LittleMighty

Him – Sheila Hill (England)
Lying somewhere between theatre and visual art, actor Tim Barlow reflects back on life, and the natures of stillness, and ageing with his words interwoven with periods of silence, and live original music. There will also be a parallel exhibition of photographs by Hugo Glendinning and a documentary about the making of the work by Caglar Kimyoncu.
Producer: tbc

The Way You Look at Me Tonight (working title) – Claire Cunningham (Scotland)
The Way You Look at Me Tonight is a dance, a song, a story, a sculpture, a play, a fight, a journey to be sung, spoken, seen, felt, heard, read, viewed, approved (or disproved!) by Claire Cunningham and US/Berlin choreographer/performer Jess Curtis, in collaboration with renowned philosopher of perception Dr. Alva Noë.
Producer: Nadja Dias

Unlimited is an arts commissioning programme offering talented disabled artists funds and mentoring support to develop, produce and show ambitious work. The aim of Unlimited is to embed work by disabled artists within the UK cultural sector, reach new audiences and shift perceptions of disabled people. Unlimited is a £3m three-year programme delivered in partnership by Shape Arts and Artsadmin, with funding from Arts Council England, Creative Scotland, Arts Council Wales and Spirit of 2012.