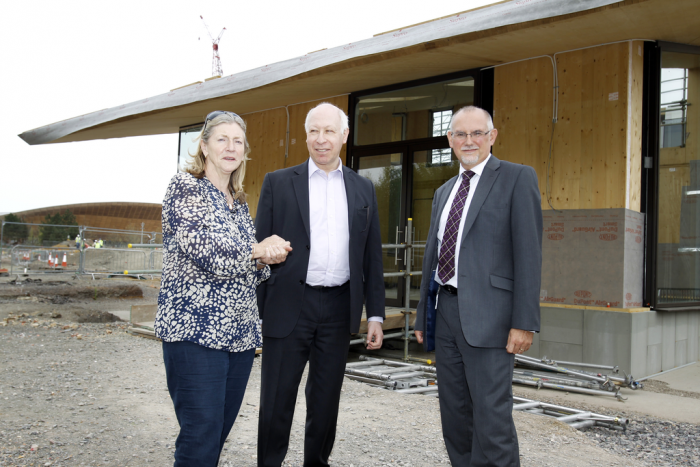 The first café on Queen Elizabeth Olympic Park will be operated by the Camden Society and named Unity Kitchen Café.

The Café will be one of four permanent cafes and four permanent kiosks across the 226 hectare (560 acre) site and will be the first to open on the Park in July.

Alongside the Café there are two community rooms, which will be run by Community Links.

The London Legacy Development Corporation has also announced today that all permanent sites will be required to sign up to the Food Legacy Pledge and the Healthier Catering Commitment, both of which are supported by the London Food Board.

“London’s Games raised the bar in terms of serving up food that met high standards, not only in terms of taste but also through a commitment to improved food quality and animal welfare. This showed that good catering can be achieved even when working to tight commercial budgets. We adopted these standards at City Hall and urged others to do the same, so I am delighted that visitors to Queen Elizabeth Olympic Park’s Unity Kitchen Café will continue to enjoy tasty grub served up by a company that’s committed to providing good food.”

“Queen Elizabeth Olympic Park will be a great destination for visitors and a new community park for East Londoners. The Camden Society and Community Links will create a great new facility in the Unity Kitchen Café and provide jobs and training opportunities for local people. We are delighted that this will continue the commitment to food standards that were adopted during the Games.”

“Unity Kitchen Café will contribute to the creation of a new and vibrant public space in the heart of east London. The combination of this beautifully designed café and flexible community space will provide a great place to relax and eat and drink with everything from community classes, to yoga sessions, to training seminars, business breakfasts, weddings and parties.

“We aim to make the most of the training and employment opportunities which the café will offer to people with disabilities, as it will be an additional venue for in-work training of our apprentices.”

“We are delighted to be part of this exciting project. We look forward to making sure Unity Kitchen Café is a fantastic resource for our local community as well as a destination for visitors from around the world.”

Unity Kitchen Café will be in the north of the Park at the newly built Timberlodge. It has space for up to 80 indoor diners and a further 100 at table seating outside.

The community rooms cover almost 150m² and open out on to a lawn enclosed by hazel woodland, which could also be used for events. They will be used for a whole range of local activities including craft days, award ceremonies, enterprise events, parties and performances.

Timberlodge has been purpose built by Bam Nuttall, it sits alongside one of the best children’s playgrounds in the UK. The playground has been partially funded by a £1million grant from the London Marathon Charitable Trust and is a spectacular children’s playground which encourages imaginative play and draws upon the natural surroundings. The playground includes hazel woodlands and pine forests, log piles and tree trunk climbing frames for children to explore. The design is based on a combination of learning and imagination to really inspire children’s creativity.

Timberlodge and the playground are situated in the north of the Park which is dominated by beautiful green parklands, meadows and the waterways of the River Lea, an area which proved immensely popular with visitors during the Games. Timberlodge has views across the Park on three sides; south into the Park towards the Stadium, north-west over the river and north across the playground and is situated on the main east to west route through the Park.

Additional temporary cafés and restaurants could be added, across the Park there is scope for a further café close to the bridge to Westfield Stratford City, a floating restaurant on the waterways, a large restaurant or bar on the highest point in the Park, known as the Belvedere and a variety of food festivals, mobile carts and pop up dining experiences.

The Food Legacy Pledge is based on the London 2012 Food Vision and Procurement Code and requires employers to pay London Living Wage, provide good food training and to source food from sustainable and fair trade suppliers where possible. The Pledge was developed by Sustain and is supported by a range of organisations across the capital.

Queen Elizabeth Olympic Park opens in phases between July 2013 and spring 2014, it will be a whole new part of the city to enjoy and will provide jobs and homes for east London.

Unity Kitchen is a chain of six catering social enterprises run by a registered charity, The Camden Society. The outlets provide training and apprenticeship opportunities for people with learning disabilities, and profits are used to fund further training and employment opportunities.  Unity Kitchens are run in partnership with community and public sector organisations in public buildings, community centres, libraries and museums. www.unitykitchen.co.uk

Celebrating superheroes with the Sunnybank Trust

Two thirds of carers will not get a break this Christmas, survey reveals

Supporting charities and those in need during COVID-19