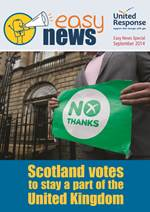 The national disability charity, United Response, has published an easy read summary of the Scottish Referendum today. By removing the political rhetoric and using simple words and images, the publication aims to make the results more accessible to the 1.5 million people with learning disabilities in the UK.

The summary is the third in a series of special edition of Easy News for 2014.  Previous special editions covered the March Budget and the EU Elections.  Easy News is a free accessible news magazine launched by United Response last year to make news easier to understand for people with learning disabilities. The magazine is produced by UR Consultants, a group of people with learning disabilities, supported by United Response.

A bi-monthly magazine, Easy News was created to make the events in the news and political debate more accessible, and so make it easier for people with learning disabilities to follow developments and express their opinions.

The high level of engagement and turn-out in the Scottish Referendum clearly show how the United Kingdom is governed is very important to many people.  United Response hopes that our Easy News special will enable people with learning disabilities to also take part in that debate. This special edition of the magazine outlines details of what each side hoped for, how the votes were cast and counted and what this means for the future.

“We hope that people will find this special edition of easy news useful. The outcome of the referendum will have an impact on the way that the whole of the United Kingdom is governed and it is important that people with learning disabilities have the opportunity to form their own opinion on that and understand the changes when they happen.”

To download the Easy News special on the Scottish Referendum Result, and to find out more about Easy News, follow this link.

To find out more about Every Vote Counts, United Response’s campaign to make voting more accessible for people with learning disabilities go to www.unitedresponse.org.uk/every-vote-counts

“Life is what you make it”