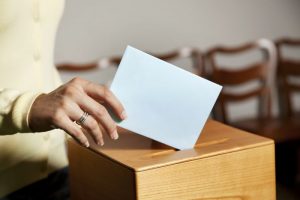 National disability charity United Response has recruited a political correspondent to ensure that the 1.5 million people in the UK with a learning disability use their democratic right to vote at the May General Election.

A key part of this role will be to raise awareness of this legally entitled groups of voters whom politicians are currently not engaging with.  The coming election will see parliamentary seats won and lost on tight margins.  Candidates and political parties need to make their election literature and manifestos easier to understand for people with learning disabilities to see them cast their vote at the ballot box.

The successful candidate to the role of political correspondent, 37 year old David Allkins, who has Asperger’s Syndrome and communication difficulties, has a wealth of knowledge on politics, and is planning to use this, along with his own experiences of disability, to inform the series of online video reports that he will be producing over the next 5 months.

Today, David from Newquay, Cornwall, will complete his first assignment as United Response’s political correspondent at a key meeting of the All Party Parliamentary Group (APPG) for Learning Disability, at the House of Commons.  David will be reporting from the event, as well as addressing all those present, including the Minister of State for Disabled People, The Rt Hon Mark Harper MP, on the barriers that people with learning disabilities face when it comes to voting.

Although very politically aware himself, David knows that this is not the case for many disabled people. Speaking about what he hopes to achieve through the role, David said:

“Politicians and mainstream media assume that lots people know about politics, but lots of people with learning disabilities find it difficult to understand.  I want to make politics more accessible by producing concise videos and blogs.”

Asked, during the interview process for the role, what he would do if he was Prime Minister, David said:

“I would replace Prime Minister’s Questions with a set of questions sent in from the public that the PM answers each week.  So that, rather than a bunch of people shouting at each other and name calling, there’d be a more sensible process.”

United Response has created the political correspondent post as part of its Every Vote Counts campaign, which aims to make information about politics and voting easier to understand for the 1.5 million people in the UK who have a learning disability.

The campaign has received support from across the political spectrum, with The Rt Hon Mark Harper MP, Kate Green MP, and The Rt Hon Paul Burstow MP, all taking part in videos to promote the campaign.

Research carried out by United Response shows that only 1 in 8 of the people that it supports with learning disabilities voted in 2005. Many cited a lack of easy to understand information about politics and voting, as well as a lack of awareness among politicians about the rights and needs of disabled people, as their main reasons for not voting.

Through the creation of easy to understand resources on politics and voting, as well as campaigning by United Response and other learning disability organisations, this increased to 1 in 3 at the last General Election, but is still far below the 65.1% turnout of the general population.
United Response’s director of communications, Diane Lightfoot, said:

“People with learning disabilities have the same right to vote as everyone else, yet far too few are using their vote. We want to change that and look forward to working with our new political correspondent over the coming months to make politics relevant and meaningful to people’s lives and to challenge perceptions of disability.”

Over the next few months, David Allkins will be working with United Response’s Campaigns team to produce a series of exclusive video interviews and special reports to help make politics easier to understand for people with learning disabilities. As a member of UR Consultants, a group of people with learning disabilities and autism, who produce United Response’s award winning accessible news magazine, Easy News, David has much experience of making complicated information easier to understand. He plans to use his knowledge to travel the country interviewing politicians, commentators and people with learning disabilities and highlighting what can be done to increase the turnout of disabled people in May. His video reports will be available on United Response’s website and YouTube channel.

nited Response is a community based charity that works with people with learning disabilities, mental health needs or physical disabilities- including some of the most vulnerable people in our society. Our vision is of a society where disabled people are equal participants and have access to the same rights and opportunities as everyone else. www.unitedresponse.org.uk

John reaches for the sky

Sussex athlete Jon will aim high at the Invictus Games