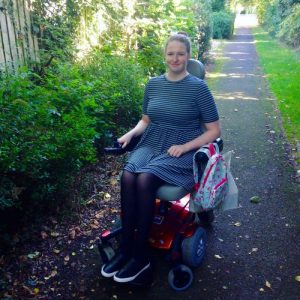 Marfan syndrome is a genetic connective tissue disorder which can affect almost any area of the body. Symptoms include hypermobile joints, lens dislocation in the eye and spinal deformities. It can also cause heart problems, which makes Marfan potentially life threatening – but there is a lack of awareness of the condition. We spoke to Shona Cobb, who has been dealing with Marfan since birth and raises awareness of it through her blog, Shona Louise.

How does Marfan syndrome affect your day-to-day life?

Marfan affects me every minute of every day. I use a powerchair/wheelchair because of the condition and other secondary problems it has caused, it has left me unable to walk outside my house and some days I’m even bed bound. For me it means that simple tasks like getting dressed become a challenge and I often need assistance from others, or aids, to help me to complete such tasks.

When were you diagnosed? Was it easy for doctors to spot?

I was quite lucky – I was diagnosed practically from birth. Due to my mum’s dad dying from Marfan while he was still very young my Mum knew that she had the condition when she was pregnant with me and therefore knew that there was a chance I could have it. My long arms and legs were the biggest sign that I had probably inherited the condition and once doctors had done a few more tests it was confirmed.

Many people though don’t get diagnosed until they are well into adulthood and unfortunately because of the life threatening aspect so many people don’t get diagnosed until they have unfortunately passed away because of the heart complications. This means that knowing the signs of this condition is so vital, yet nearly all the doctors I see are clueless about it. Knowing the symptoms really could save someone’s life.

What kind of treatment do you receive for Marfan syndrome?

I’ve had quite a lot of treatment because I have developed a lot of secondary conditions. I found out that I had scoliosis, a curve in my spine, and it was too severe to treat with physio or braces so in 2013 I had major spinal surgery to straighten my spine with metal rods and screws. There were complications though so a year later I had a second surgery to replace a screw that was sitting on a nerve.

At the end of all that we discovered that I had a problem with my hips called protusio acetabuli. My hip sockets were abnormally deep and I had very little socket bone left which meant I was at risk of fracturing my hips. So, in 2015 I had my first hip replacement at the age of 18.

As for my heart, I found out this year that I am getting very close to the point where I will need surgery on it – my consultant predicts I will need major open heart surgery within a few years to replace part of my aorta that is stretching a lot, putting me at risk of an aortic tear/dissection. I’ve had quite a lot of treatment and with a lot more to come but as I said before I do sit on the more severe end of Marfan syndrome.

Last year you raised funds to buy a powerchair – how has this helped you?

I’ve needed to use a wheelchair for over a year now due to my conditions but I’ve never been able to self-propel in a manual chair due to pain, dislocations and fatigue. Having my wheelchair pushed by family all the time, with no choice in where you go and when you go out is tough to deal with, especially when you are 17/18 years old.

I contacted wheelchair services but they weren’t able to help me and due to my health I can’t work at the moment so I didn’t have any money or savings sitting around to be able to buy one myself. It was really getting me down because I had hardly any independence left so someone suggested using Go Fund Me to raise the money I needed. I felt bad asking people for money but it was the only way I was going to be able to get my life back.

In the end it didn’t take long to raise the £2,000 needed due to friends, family and a very kind stranger who donated nearly £900. Unfortunately since then my health has declined a lot and this chair won’t be perfect for me for much longer but we are hoping to apply to wheelchair services again since my health is worse to see if they can supply me with something that will be more comfortable and practical.

What advice would you give to someone who has just been diagnosed with Marfan syndrome?

I would tell them to join the support groups on Facebook, they aren’t perfect but it is a great place for someone who is newly diagnosed to get to know their condition. There isn’t much helpful information online and I think finding out about others personal experiences will always give you a better insight than a Wikipedia page.

Finally, don’t think about the worst case scenarios too much. It’s very easy to run away with yourself and start thinking horrible things but science and technology is amazing these days and most people with Marfan are able to live very full lives.

An interview with Scotswoman of the Year: Sally Magnusson

The importance of purple