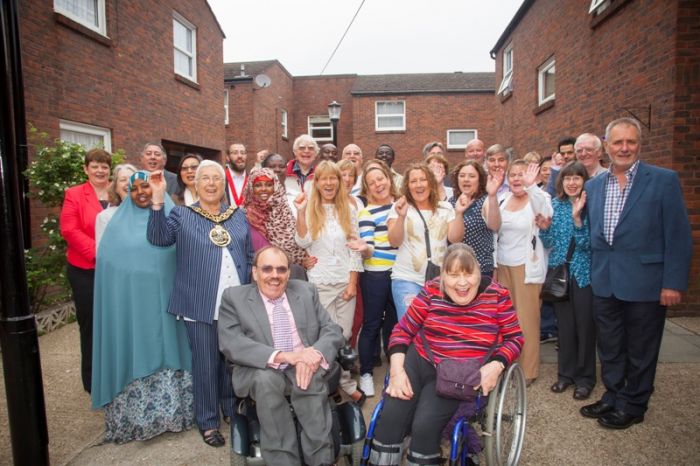 Opened by then Prime Minister Edward Heath in 1973, this ground-breaking scheme was the first of its kind, designed for the needs of disabled people in an inclusive way. It designed out the typical barriers (such as steps, curbs and narrow doorways) preventing disabled people from playing an equal part in their communities and living alongside non-disabled people. Its enduring success shows that an accessible standard can cater for a wide variety of housing needs. Moira Close influenced housing design forever, leading eventually to the Lifetime Homes Standard and Wheelchair Housing Standard, adopted by the London Plan in 2004.

“Moira Close was revolutionary in providing accessible and inclusive homes for disabled and non-disabled people to live together. We are here to celebrate the importance of this first step.

Alice Moira, daughter of Moira Close architect and Habinteg founder Alex Moira, was the original inspiration to design a place where she could live freely and independently as a wheelchair user. She spoke warmly of her father’s vision and drive in getting Moira Close from blueprint to bricks and mortar with the support of Haringey Council.

“The importance of accessible housing cannot be understated. My home has given me the freedom, independence, choice and privacy that was simply not available to wheelchair users prior to Habinteg’s creation.

“My father’s dream was that there would be Habinteg schemes throughout the UK, so that disabled people had the same chances to move house as non disabled people. So he would be very happy to see that Habinteg’s work, started at Moira Close, continues to provide accessible homes and communities all over the country which are designed for everyone”.

“It gives me great pleasure to be here at Moira Close on its 40th Anniversary. I can see that this place has stood the test of time and has proven its success in meeting housing needs in an inclusive environment.

“Having spoken to tenants, it is clear that the sense of community and its accessible homes make Moira Close a place that people want to live. Here’s to the next 40 years!”

“I was a tenant here on Moira Close and I know from my own experience how important having an accessible home is to living independently. When I first came here in 1978 it was impossible to find an accessible home in London and my life would have been different without the support Habinteg gave me.

“Habinteg has played a vital role in giving better choices to disabled people over the last 40 years”.

“Through the Mayor of London’s policies in the London Plan we have been promoting a more accessible environment in London, helping create opportunities for disabled and older people to participate in all that our great city has to offer.

“Thank you to Habinteg for the work you started all those years ago at Moira Close and the work that you continue to do to help create an accessible environment for everyone.”

“On behalf of Haringey Council, I would like to thank all the tenants and staff here for making Moira Close the thriving community we see here today.

“I am proud that it was in this borough that Habinteg’s first accessible and inclusive scheme was built. Haringey saw the importance of these new ideas back in the 1970s and supported this development with the land and a loan to ensure it progressed. I witnessed the development of the site and was here at the opening, so I am very pleased to be here at this celebration of Moira Close.”

National telecare service up and running

Back to the land for Highdowns residents