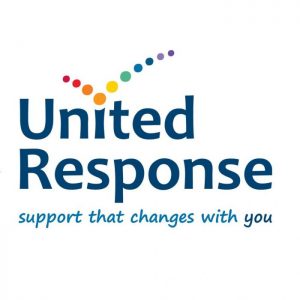 Yesterday politicians from all parties put aside their differences to throw their support behind the House of Commons launch of Easy News – the first ever easy read newspaper designed specifically for people with learning disabilities, created by disability charity United Response. Esther McVey MP, the minister for disabled people, joined Rt Hon Anne McGuire MP, the shadow minister, to support the newspaper. Esther McVey called the newspaper “a wonderful initiative”. Disability activist Kaliya Franklin also delivered a powerful keynote speech on the importance of information in delivering true equality.

Around 100 people gathered in the House of Commons, including people with learning disabilities, other charities, peers and MPs from all three of the main political parties. The event was hosted by Conservative MP Eleanor Laing, who described her passionate belief in the importance of clear communication, alongside Martyn Lewis CBE, the President of United Response. Martyn interviewed Nick Smith and John Nettles, two people with learning disabilities who worked on translating major news stories into an “easy read” format, which uses simple words and visual cues.

Esther McVey, the minister for disabled people, said: “What a wonderful initiative. In fact, I’d like to ask if we can have Easy News for MPs? We could all learn from simple words, no more jargon and accessibility.” She added that it is “so important that all parties are here today as we all have the same aims, we just see things in different ways.”

Rt Hon Anne McGuire MP, the shadow minister for disabled people responded by joking: “For those who think it’s all warm and cuddly, Esther and I were just disagreeing in the corridor an hour ago!” She then described her own previous work ensuring Government documents were made accessible and said, “I am delighted to see that this newspaper will continue the work of accessibility. It’s part of the campaign for true equality, involvement and integration of those with learning disabilities, who are often at the tail end of the thoughts of many organisations.”

Kaliya Franklin, who had travelled from Merseyside to speak at the event, spoke powerfully of why equal access to information and news was a crucial part of the fight for equality. “Without the freedom to record the stories of those locked away, the platform to pass on these shameful truths of how our society disregards those it perceives as lacking contributory worth, progress can never be made. Those without power can be blamed, targeted, made less human by those who sip from the cup of success, whilst those with power are not held accountable for the consequences of their own words.”

“Today we are gathered in the heart of power, the seat of democracy to celebrate how far disabled people have come, and attempt to speed up the pace of travel to full equality. The right to vote is insufficient on its own, without the provision of non-partisan news and information in a format everyone can understand, voting remains a token gesture based upon empty words.”

Nick Smith, one of the UR Consultants team of people with learning disabilities who translated the report, said “It’s fantastic to be here.” He also said in an interview, “”I like to stay informed. I watch the news two or three times a day, I like to see if anything’s changed. And I check it on my ipad. But I know some people who don’t keep up with things because they can’t read. I hope people like that will think Easy News is good, that it helps. The news is important for everybody.”

Easy News will be produced every other month and will be available in paper, downloadable PDF and audio versions. The first edition covers top stories from 2012, including changes in the NHS, recent successes in the Paralympics and much more. The stories have been translated into easy read from a variety of news sources and are delivered in an unbiased, non-partisan way. The selection of stories is based on areas of interest indicated by survey respondents. The project has been part funded by the Big Lottery Fund.

United Response Chief Executive Su Sayer CBE said: “I’m very proud that we are starting our 40th anniversary year by launching something as creative and important as Easy News. The people we support are affected by events in the outside world, including politics, as much as anyone, if not more so. Yet they often find it hard to find out what is happening because news outlets and politicians tend to use very complex language. This easy read newspaper will give them the chance to find out what is happening and to get involved, by voting or making their voices heard.”

For further information on Easy News and to download a copy, go to www.unitedresponse.org.uk/easynews.

Politics: Calls for evidence on the access to elected office

Making sense of the senses