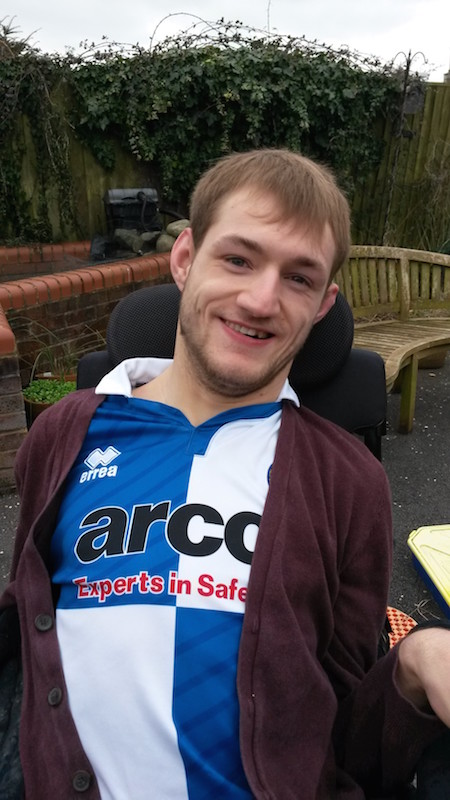 A Trowbridge man with cerebral palsy has been selected to play for the England boccia team.

The 23-year-old, who is unable to talk, move his arms or torso and plays boccia through the use of a head pointer to grip and release the ball, was selected to join the England Lions Squad after 16 years of competing in the sport.

Jonah first took up the sport at school, when a quick-thinking PE teacher realised that, although he wouldn’t be able to take part in many of the school’s other sports, boccia would be a viable alternative.

Jonah’s father, Trevor, who is a teacher himself, was bowled over by the idea, which saw Jonah, who could still use his arms and hands at the time, use a ramp to guide the balls.

Since then, Jonah’s career has taken off, going through the ranks from local to regional to national competitions, which has seen him compete from Sheffield to Nottingham to Mansfield.

Jonah said: “I’m so excited about being selected – now I have to train to get ready.

“I do need to keep my excitement in check as it can affect my control of my body, but for now I’m thrilled I get to train for the Lions Squad and the Championships throughout the season.”

Trevor said: “What we’ve found over the years with Jonah is that a disability of this nature doesn’t mean you have to stop having fun or doing the things you want to do.

“We have had to make adaptations but we are so proud of Jonah for pursuing his passion and coming so far in doing so.”

But travelling across the country comes at a price in the form of hotel and fuel bills – and it’s a price parents Trevor and Corrine Wright have been paying out of their own pockets as they travel with Jonah and his brother, who helps support him, to each fixture.

To help make ends meet, the family has also been relying on the good wishes of friends, acquaintances and the wider community.

Often, visitors to local social venues like pubs will donate towards the family’s costs, while occasionally people will embark on fundraising ventures to raise a large amount in one go.

Recently, a bike ride raised money for both Jonah’s boccia expenses and Stepping Stones, the charity which first gave the Wright family advice and support on how to manage his disability.

Outside of his boccia, sessions, Jonah travels to church every Sunday, visits Christian rock festivals and cheers on his football team, the Bristol Rovers.

She said: “Jonah is just an inspiration. As a result of his cerebral palsy, he has had to adapt and find other ways to accomplish everyday tasks.

“He has learned to do a lot with his feet, such as doing his washing and keeping in touch with friends and family on his iPad – probably typing faster than you or I could!

“To achieve all of that and be selected to compete in boccia at a national level is just utterly phenomenal.”

Shaftesbury Court was recently awarded a ‘Good’ rating by the Care Quality Commission (CQC), which credited the home for the calm and relaxed interactions between staff and residents, as well as its response to safeguarding concerns.

Anyone wishing to contribute towards the costs of Jonah’s fixtures can visit his JustGiving page: crowdfunding.justgiving.com/jonah-wright