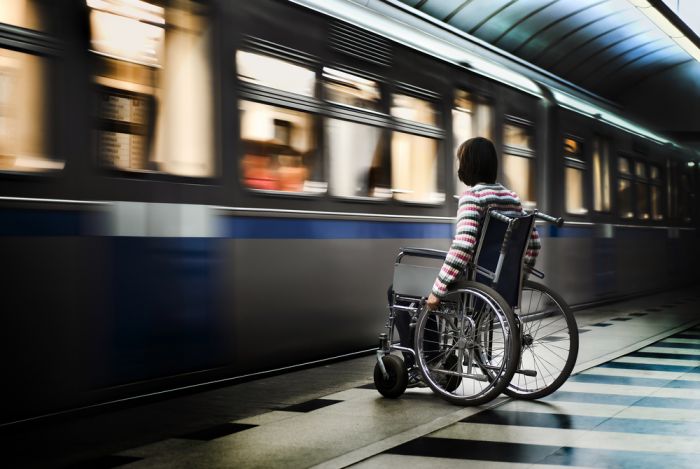 Disabled people have reported more difficulties using public transport than there were three years ago, according to a survey conducted by the charity Leonard Cheshire Disability.

The charity’s latest research shows that, despite efforts to improve accessibility before the Paralympics, nearly 40% of disabled people who took part in the UK-wide survey of over a thousand, said they had difficulties using public transport. This figure (37%) is ten per cent higher than the equivalent figure in the charity’s survey in 2009.*

The most common issues raised by disabled people were:

Leonard Cheshire Disability is today submitting evidence to the Transport Select Committee, using the findings of their research to provide evidence of the barriers disabled people face accessing public transport.

Guy Parckar, Leonard Cheshire Disability’s head of policy and campaigns, who will be giving evidence, said: “In the year following the Paralympics it is simply not acceptable that disabled people are still having so much difficulty using public transport. There have definitely been some positive improvements to accessibility on transport, but our research shows that many people are still coming across problems, sometimes serious enough to put them off using public transport altogether.

“Disabled people need to be able to use public transport just like anyone else – it is not a luxury, it’s a necessity. Without it they face isolation and unaffordable costs.

“There is definitely greater awareness of access issues than there used to be, and some very positive changes have been made, but our research suggests that there is still a long way to go before transport is fully accessible. One of the key issues that came through in our survey was the impact of staff training and attitudes – when staff displayed sensitivity and supported them throughout their journey, disabled people reported that it had transformed their experience.”

Among those using trains, 38% reported that they had experienced difficulties. A third of those talked about problems with assistance and support, and a quarter said they were unable to use the station facilities such as waiting rooms and toilets.

Using taxis also proved difficult for some disabled people. Among those who had used taxis in the last yea,r 60% of the respondents who use wheelchairs and 30% who are blind or partially sighted said that they had experienced problems. The main problems identified were around getting in to taxis or drivers refusing to stop for them because they were disabled, or being charged more to use the taxi.

Taxis are a lifeline for many disabled people who are unable to drive or can’t access public transport. Currently, a section of the 2010 Equality Act  puts extra duties on taxi companies to treat disabled people equally, but the Government has yet to bring this into force.

On buses, issues with wheelchair spaces being occupied by pushchairs and prams were widely reported. Despite signage clearly indicating that wheelchairs have priority, this is often poorly enforced and on occasions this has led to wheelchair users being denied access to the bus. People using wheelchairs said that they had been told to wait for another bus, only to find the same problems on the next bus. Out of those who said they had problems using buses, 15% said that they were unable to get on because there was a buggy in the wheelchair space.

In London, Transport for London has issued new guidance to bus drivers to help improve journeys for wheelchair users, including a reminder to bus drivers that the wheelchair bay on a bus is primarily for the use of disabled passengers and that they should announce this on the PA system if necessary. Leonard Cheshire Disability is calling for this to be properly enforced across the UK.

Barry O’Connell, 65, is from Clacton-On-Sea and uses a wheelchair. He says: “I can never be certain someone will be there to get the ramp out and help me off the train and I always dread the train coming to my stop. I have noticed that there are less and less staff at stations to help me. It is often the ticket office staff who are the only people around to help me and they are often very reluctant to help as they have to shut their office to come out and assist. When I am coming back late at night it is even worse as it is even less likely there will be people to help me off. Often late at night there are people who have been drinking and they get quite agitated when their journey is delayed because I cannot get off the train. Once they were shouting for the train driver to come and get me off and I felt quite threatened. There was another time when a member of staff from the ticket office was forced to come out to help me off the train but his attitude was very negative ‘it’s not my bloody job’, he said.”

Gill Stancer, 72, is from Lymington in Hampshire and uses a wheelchair. She says: “I have been discriminated against by taxi drivers because I use a wheelchair. One particularly bad incident happened last year when me and my daughter were in London trying to get a taxi at Victoria Station. We were either repeatedly turned away by drivers offering excuses such as ‘don’t have a ramp’ and ‘my cab is the smaller version’, or deliberately ignored. Eventually we gave up on the taxi rank and after about a mile my daughter managed to hail a taxi off the street by instructing me to hide around a corner. The cabbie advised us that in fact all cabs have to carry ramps by law and are not at liberty to pick and choose their passengers and advised us to report the incident. Sadly we couldn’t as there were too many taxis involved and we hadn’t had the presence of mind or time to take down each vehicle’s registration number as would have been required to officially log a complaint. In Lymington taxi drivers have also charged me up to 15 per cent more simply due to the fact I am a wheelchair user.”

Mercy Murua, 34, from Croydon, London, uses a wheelchair. She said: “The biggest issue I find is that buggies often mean you can’t get on the bus, because it’s taking over the space designated for wheelchairs. Sometimes people are perfectly polite and move, but others refuse and argue with you. Often, drivers don’t enforce the rule that a wheelchair user has priority over a buggy. What’s even more upsetting is drivers who say to me ‘the buggy was there before you’ or ‘you can’t get on because there’s a buggy’. People should be considerate, but often they are not, and they refuse to fold their buggies.

“Other times people with lots of shopping bags, or who are using shopping trolleys, don’t want to move and make way for me. Some bus companies seem to train their staff better than others. Some drivers seem to be really badly trained and they are reluctant to get the ramp out and sometimes they say ‘there’s another bus behind’. Sometimes they don’t seem to know how to use the ramp properly, but they get annoyed when I offer advice, saying ‘don’t tell me how to do my job’. I use a bus every day and I think I know how they work better than the drivers. Sometimes they say the ramp is not working, but the regulations state no bus can be on the road if the ramp is not working.

“On one of the buses I use the ramp works ok, but there is a little step from there to the bus and that makes it almost impossible to get on the bus, most people need to ask for help.

“Wheelchair users are supposed to sit with their back to the window, but it’s not practical at all, as it’s hard to manoeuvre into the space, you can’t see where you are going and if you have shopping on the back of the wheelchair there is no space. Sitting with your back to the window also makes me feel less safe, as I can’t hold onto any railings and I feel more impact if the bus driver has to brake suddenly. Travelling backwards makes me feel sick too.

“If disabled people had good experiences on the bus they would be more likely to use them, but you often need to be quite assertive and strong and this puts people off because they don’t want a battle every time. I’ve reported bad drivers before, but I don’t see much action has been taken. I’ve even offered to assist them in their staff training but my offer’s not been taken up.”

Leonard Cheshire Disability is one of the UK’s largest voluntary sector providers of services to disabled people. We support thousands of people with physical and learning disabilities in the UK and we work with Cheshire partner organisations in 54 countries around the world. We campaign for change and provide innovative services that give disabled people the opportunity to live life their way. Visit www.LCDisability.org

Appreciating the Power of Small on Time to Talk Day 2021

Calling for accessibility on the high street