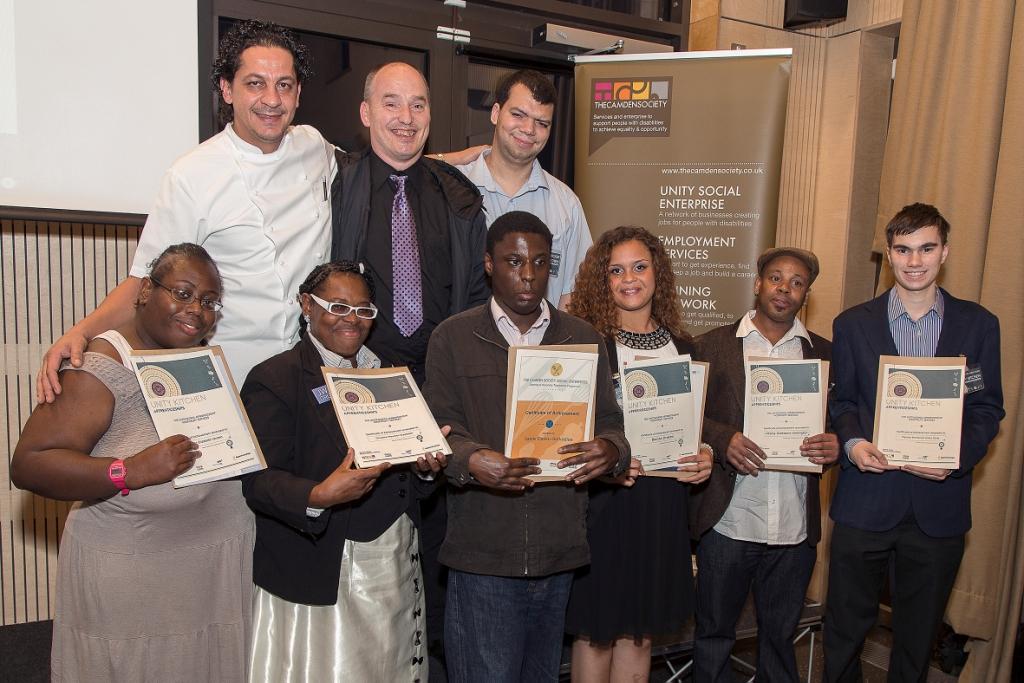 Award-winning chef, and owner of London’s L’Anima restaurant, Francesco Mazzei presented 20 hard-working apprentices and trainees with their catering qualifications on 25 September at a ceremony in the Queen Elizabeth Olympic Park (QEOP). Each one of the apprentices and trainees has a disability and the qualifications, were gained through a specially created scheme run by Unity Kitchen, the social enterprise arm of charity, the Camden Society.

The ceremony was held at the social enterprise’s flagship outlet, Unity Kitchen Cafe and Events, housed in Timber Lodge at QEOP. Five of the 7 graduating apprentices have already found jobs as a result of being on the scheme and they are among 32 people with disabilities who have come through the apprenticeship scheme since it began in 2010. Unity Kitchen opened its first cafe in 1985 and has seen 128 students gain NVQ accredited qualifications with Unity Kitchen in the last three years alone.

Over the last 12 months apprentices from Unity Kitchen outlets at Tooley Street, Firepower, St. Luke’s and Flapjacks have worked in all sections of these busy cafes. They have been learning the essentials skills needed for their chosen careers. Some excelling in customer service whilst others demonstrated their culinary flair, all essential ingredients to ensure customers are happy and that the apprentices achieve their Level 2 NVQ Diploma in Hospitality Services. They also attended Westminster Kingsway College one day a week to achieve their functional skills qualification.  In addition 10 trainees working at Jacksons Café and Firepower have achieved Level 1 & 2 NVQ Diploma in Hospitality Services.

The apprentices are currently making career plans with the support of The Camden Society’s employment teams. All will get support to search for jobs and apply to vacancies to build their careers.

Apprentice Maxime Soret, who is from Camden, has a great drive to be a chef, attending Barnet College as a catering student. He achieved Level 1 in professional cookery. He then successfully applied for a Camden Society apprenticeship, working and training at two Unity Kitchen outlets, and achieving a Level 2 NVQ Diploma in Hospitality. Maxime has a great passion for creating dishes from fresh food. He recently travelled to Italy, where he was taught to make fresh pasta and gnocchi. He plans to take his skills to the next level, and has just been accepted for a Level 3 Apprenticeship in professional cookery.

Hackney-based Maureen Stapledon is very much a ‘people person’ and uses her personality and energy to give a warm and friendly welcome to visitors to Unity Kitchen. She is very specific and focused on what she wants to achieve and the kind of job she wants. She now has a Level 2 NVQ Diploma in Hospitality, focusing on customer service. Her manager has received many compliments and much praise from satisfied customers about Maureen.

Terry Tucker is a confident budding chef from Haringey. During workshops he supported others and came up with creative ideas in menu preparation. He achieved NVQ Level 2 Diploma In Hospitality, specialising in food preparation and cooking. Terry’s head chef said that he researched ideas to develop ideas for menus. He used his own initiative and always worked hard to improve his skills.

“Catering and hospitality is a tough but rewarding life. And all the Unity apprentices and trainees should feel proud of their achievement in gaining their qualifications as a step along the road in their chosen careers. With the help of Unity Kitchen’s imaginative scheme many of them have battled against the odds to get these qualifications. They deserve every success that comes to them as a result.”

Find out more about the project at www.unitykitchen.co.uk

Social enterprise caters to the stars at autism charity gala

Disability is Our Ability: ‘I used to think the only person who’d hire me was me’