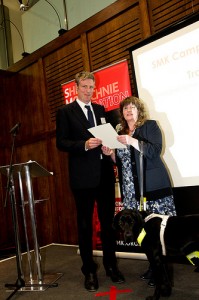 A disabled campaigner from Norwich has scooped an award for her campaigning work to improve access on public transport for other people with sight loss.

The awards recognise inspirational campaigners who would benefit from getting some additional tailored support from the SMK Campaigner Awards programme.

Bernie is a volunteer campaign co-ordinator for the Royal National Institute of Blind People (RNIB) and has worked on several campaigning issues to enable blind and partially sighted people to live independently.

Bernie organised for the leader of the council to take part in a blindfold bus journey to gain some understanding of the issues blind and partially sighted people face and just how expensive it is for people with sight loss to do every day activities sighted people take for granted. The event was hailed as a key part of changing attitudes locally, with the concessionary bus passes ultimately getting reinstated.

Bernie said: “I’m thrilled to have won and can’t quite believe it. Through education and liaison I would like to increase the understanding of decision makers, transport operators and the general public about the barriers which prevent people with sight loss from being fully independent and included members of their communities.

“Local bus travel is a lifeline, providing a sole means of transport within the community for those who are not able to drive and cannot fund repeated taxi journeys. As Norfolk is extremely rural, people with sight loss can feel very isolated. That’s why this campaign was so important.”

The winners will each receive tailored support from SMK Campaigner Awards Programme which offers support, advice and a place to share information on key areas of effective campaigning: from strategy, tactics, and targets to evaluating successful campaigns.

Emily Papaleo, RNIB’s Regional Campaigns Officer for East of England, said: “RNIB is committed to creating an inclusive society for blind and partially sighted people and campaigners like Bernie are central to achieving this. We’re extremely proud of Bernie for winning this well deserved award and we look forward to working with her on other campaigning issues in the future.”