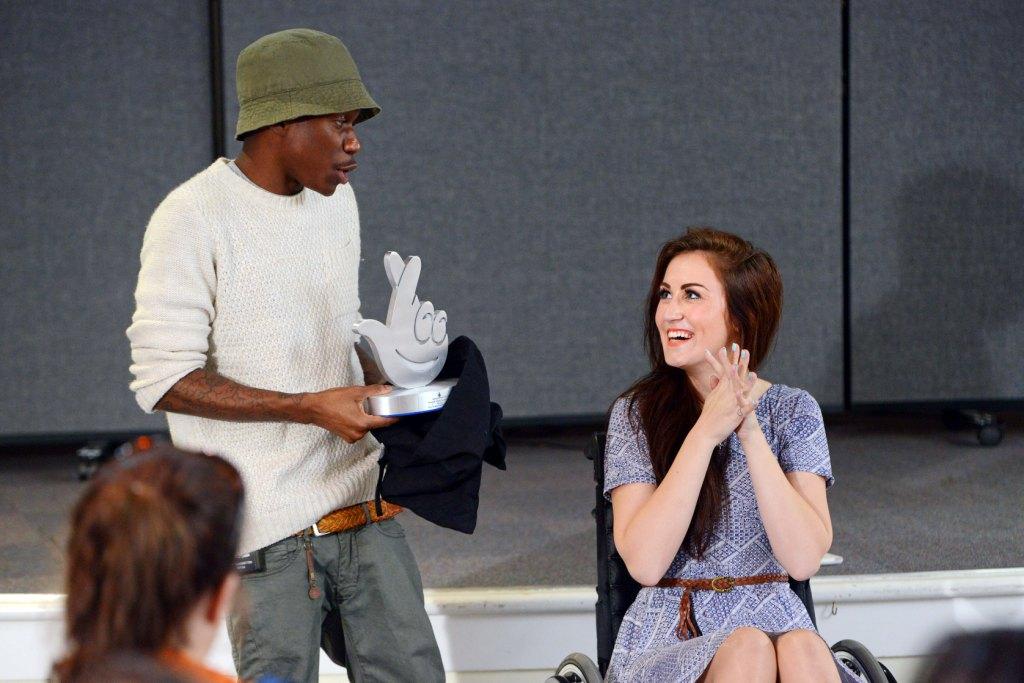 Musician and entrepreneur Tinchy Stryder today surprised an inspirational young woman with the news that a charity close to her heart, Fixers, has been voted the UK’s Best Voluntary/Charity project in this year’s National Lottery Awards.

23 year-old Chelsey Jay, a young Fixer from Witham, has led a campaign for the better representation of disabled people in the fashion and media industries.  She was doing a presentation to other young people about her campaigning work when Tinchy broke the news to her.

Fixers are inspirational young people making positive changes for the people around them.  Aged 16 to 25, Fixers use their past experiences to ‘fix’ or change the future for themselves and others.  12,500 young people have become Fixers across the UK, helping others and gaining vital life-changing confidence and skills.

The charity received 6,919 votes to win Best Voluntary/Charity Project in this year’s National Lottery Awards, which is the annual search to find the nation’s favourite Lottery-funded projects.

Tinchy Stryder says: “Fixers are an inspirational group of young people doing their best to make a positive impact on the world.  I’m so pleased I was able to tell them they’d won this award and congratulate them on the amazing work they are doing.  It was a fantastic reaction when I presented the trophy, it obviously means such a lot to everyone involved.”

After developing the neurological condition postural orthostatic tachycardia syndrome (POTS), Chelsey Jay found herself unable to stand up without fainting.  Since becoming a wheelchair user, Chelsey realised how rarely disabled people are represented in the media and has felt isolated.  She is now a disabled model and an ambassador for Models of Diversity, a campaign for more diversity in the fashion industry, and is determined to show the film, music and fashion industries what they’re missing.

Chelsey campaigned for Fixers to win the Award and was overjoyed to receive the trophy from Tinchy:

“To suddenly become disabled gave me a real wake-up call.  I realised how rarely disabled people are represented in the media and I began to feel isolated.

“I want to try to change that – showing the film, music and fashion industries what they’re missing.  I’m so excited that Fixers has won this National Lottery Award.  It’s an amazing achievement for everyone involved in the project.”

Margo Horsley, Chief Executive of Fixers, says: “Every single one of our 12,500 Fixers should take pride in winning this prestigious award.  It is recognition for all their hard work and belief in making a positive difference.  I’m so proud of the life-changing impact the Fixers are making.”

The achievements of Fixers will be celebrated at a special star-studded ceremony, The National Lottery Stars, broadcast at 10.30pm on BBC One on 19 September.  The charity will also receive a £2,000 cash prize to spend on its project as well as the coveted National Lottery Awards trophy.

More about the charity

Fixers are young people aged 16 to 25 with different backgrounds, interests and life experiences, and come from all UK postcodes.  12,500 Fixers are using their experiences to prevent what happened to them happening to someone else.  They do this by telling their own stories in their own words.  The issues tackled in some 1,500 projects include eating disorders, abuse, physical and mental health conditions, offending and cyberbullying.

£7.2 million of National Lottery funding contributes towards the office space, equipment and the 80-strong staff who enable young people to ‘fix’ things.

More about the Awards

There are seven categories in the Awards, reflecting the main areas of Lottery funding: arts, education, environment, health, heritage, sport, and voluntary/charity.

Confused by your Christmas gadget? RNIB Technology Support Squad to the rescue