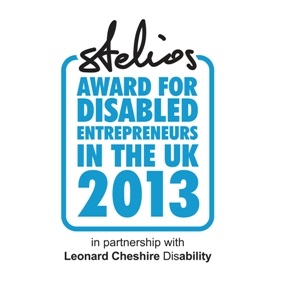 Three outstanding disabled entrepreneurs have been shortlisted for the Stelios Award for Disabled Entrepreneurs 2013, a competition run by easyJet founder Sir Stelios Haji-Ioannou and the charity Leonard Cheshire Disability.

The winner of this year’s award will receive a £50,000 prize – the largest cash sum of its kind – at a special awards ceremony to be held in London on 12 December.

The finalists (in alphabetical order) are: 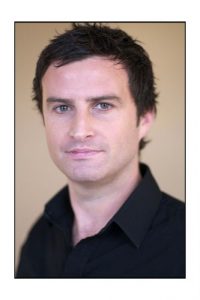 Lexicon Decoder produces LEXI, a graphics system which was used by Channel 4 in their coverage of the Paralympic Games. The system uses a system of ‘traffic lights’ to explain concisely and accurately the different disability and impairment types within a Paralympic sporting classification, so audiences can understand why athletes are competing together.

Always a keen swimmer, Giles thought his dream of becoming a world-famous champion had been shattered when he was diagnosed with bone cancer in his arm at the age of 13. Despite the apparent end of his able-bodied swimming career, Giles carried on swimming, reaching his career peak when he won gold in the S8 100 m Butterfly in a new World Record time at the Sydney 2000 Paralympics. In total he has won three gold, two silver and two bronze medals in Paralympic competitions.

Giles says: “I realised that few people understood what the Paralympics were and how the classifications worked. Its complexity was a real turn off for them and that was disheartening for me. I realised that there could be a graphical solution to this confusion. That was then I first had the idea for LEXI; it first hit UK and Australian TV screens during the coverage of the London 2012 Paralympic Games.” 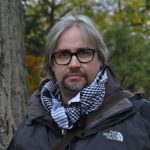 James and his team design and build garden room extensions, which have tiled roofs. Unlike a traditional conservatory, the rooms are warm in winter and cool in summer. James began trading in 2011 and already employs seven people. Now with a turnover of almost £300,000 James works with homeowners across Buckinghamshire, Bedfordshire, Northamptonshire and Hertfordshire. If he was to win the Stelios Award for Disabled Entrepreneurs he would be able to go ahead with plans to expand his client base to new areas of the country.

After developing a degenerative eye condition called Retinitis Pigmentosa James began to lose his sight. He says: “I have faced many challenges with my eyesight deteriorating but I believe you can always engineer a solution to any difficulty.

“I have a PA who assists me by taking notes at meetings. I also make sure I know what is happening at each stage of the building process. Our build team and specialist contractors are all very aware of my eye condition and go above and beyond to make sure each project is safe, clean and tidy – if even a hammer was ever left out on site, they know I’d trip over it.” 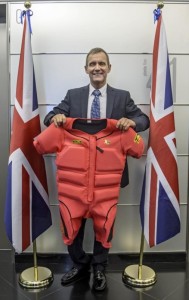 Terence developed a specialist aqua running buoyancy suit which allows people of all ages and abilities to exercise intensively in deep water with no risk of injury.

The journey to a growing, healthy business has been a tough journey for Terence, who has had two kidney transplants, has a hearing impairment and has had his right leg amputated.

Terence is a former Liverpool FC footballer and Paratrooper. Following a kidney transplant he ran the London Marathon, and represented Great Britain at the World Transplant Games in 1993, where he won Gold in the 5000m running event. Sadly, after the World Championships, his transplant failed and he then spent 12 years on dialysis, spending six days a week in hospital, until having a second transplant in 2006. During this time he began to use a wheelchair. As a form of therapy he began running in a swimming pool, and that was where is idea to develop a buoyancy suit was first born.

In 2011, Terence had to have his right leg amputated as a result of complications following an operation to remove a cancerous para-thyroid gland. Ten days later he was running in the pool in the bodysuit he had developed. The suit is used by top football clubs including Real Madrid, Manchester United, Liverpool, Manchester City and the England national side.

Terence says: “I use my experiences of injury and illness to develop my business and to enhance people’s lives in a positive and healthy way. Winning this award would be very helpful at this crucial time in our development, and would help to cover the costs of opening a new factory unit, sourcing materials, employing a new workforce and expanding our licensing opportunities around the world.”

Sir Stelios says: “I have been really impressed by finalists and I look forward to this year’s ceremony where the overall winner will be revealed. I am passionate about encouraging entrepreneurship, and the previous winners of this award offer proof that there are many highly talented disabled entrepreneurs out there.

“With around 50 per cent of disabled adults out of work it is clear that there still is a long way to go. Removing the barriers disabled people face in business is essential, and I hope that the Stelios Award for Disabled Entrepreneurs goes some way to highlighting their achievements.”

Clare Pelham, Chief Executive of Leonard Cheshire Disability says: “I would like to congratulate our three shortlisted applicants on reaching the final of these awards. We are delighted to work with Sir Stelios on an award that celebrates the remarkable achievements of disabled entrepreneurs. Our finalists are all stars and it just goes to show that there are no limits to what they can achieve.”

Leonard Cheshire Disability is one of the UK’s largest voluntary sector providers of services to disabled people. We support thousands of people with physical and learning disabilities in the UK and we work with Cheshire partner organisations in 54 countries around the world. We campaign for change and provide innovative services that give disabled people the opportunity to live life their way. Visit www.LCDisability.org

The Stelios Philanthropic Foundation is committed to dynamic philanthropy: making a positive, exponential difference through funding, inspiring and advising educational, entrepreneurial and environmental initiatives. To find out more visit; www.stelios.com