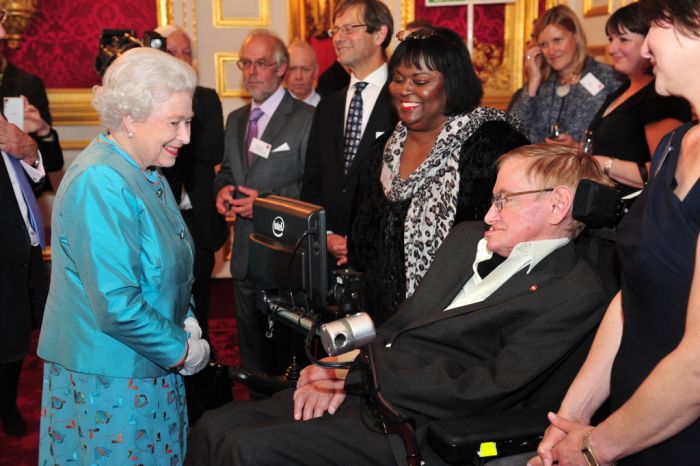 Her Majesty The Queen and The Duke of Edinburgh attended a reception on Thursday (29 May) at St James’s Palace for Leonard Cheshire Disability.

The event celebrated the work of the charity for “a world where every person is valued.” The much-loved charity, founded by Leonard Cheshire in 1948, has supported disabled people around the world to get an education, start enterprises and campaign for change.

During the reception, The Queen and The Duke of Edinburgh greeted and welcomed the guests. The lucky attendees included a 90 year-old volunteer who had dedicated 50 years of her life to help others, a former RAF reservist who chose to live in a care home run by the charity and a passionate campaigner.

Clare Pelham, Chief Executive of Leonard Cheshire Disability, told guests at the reception: “Nearly 70 years ago we started our journey in a very different world. And now we have much to celebrate. It’s a measure of how far we’ve come that it is almost impossible to imagine the world as it used to be.

“A world where disabled people were often shut away, and their potential unrealised and all that they had to offer, wasted. And our society was the poorer for it. Our founder, Leonard Cheshire, was a truly extraordinary man who started our charity with a single act of kindness when he took someone into his own home to care for him. From the very first day and the very first act of kindness we began to change the world and support disabled people to live their daily lives to the full.

We are here to finish what was started all those years ago. Because we can’t go on as we are. None of us in our hearts believes we have equality yet or anything like it. And the real danger is that if we can’t push forward, we will slip back.”

The Queen had a close connection with the charity’s founder and honoured his work during her Christmas message in 1992: (click here to view) . She also offered Park House on the Sandringham Estate to the charity, which is now used as an award winning hotel for disabled people. The special relationship with the charity has been passed down Royal generations as her mother – Queen Elizabeth – visited Le Court, the first care home to be opened in 1948.

Leonard Cheshire Disability is one of the UK’s largest voluntary sector providers of services to disabled people. We support thousands of people with physical and learning disabilities in the UK and we work with Cheshire partner organisations in 54 countries around the world. www.leonardcheshire.org