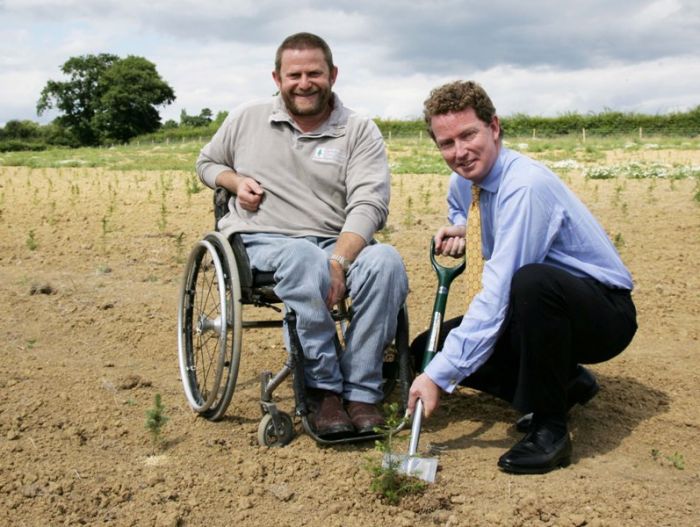 When business owner Clive Collins broke his spine twenty years ago, he thought it was all over. Having just bought a farm with the intention of growing Christmas trees, at first, Clive couldn’t see how he could make it work. But he did. After a few less-than-successful attempts, he managed to turn things around, turning the farm into an accessible, thriving business. Clive tells us about his experience in business…

In 1990 while operating my forestry business, I was involved in an accident at work and found myself in the NSIC at Stoke Mandeville with a broken back, T12/L1 complete.

When I was lying on my back in hospital, it struck me that not all my dreams could be taken away from me and that I could still grow Christmas trees. I had just bought a farm, it would mean I needed to hire people to plant the trees, apply some herbicides and various other tasks and I could sit around and watch them grow!

Looking back my REAL plan was to sit around being fairly sad and do as little as possible. After I left Stoke, I was still fairly ill. I was severely depressed, into recreational drugs, alcohol and enjoyed the occurrence of regular bladder infections. If I planted some trees it looked like I was doing something – at that time in my life status was very important to me.

After sometime I realised that I had planted all these trees and I might have to sell them. I studied Marketing and Sales for two years and I started to take some advice from a consultant Adrian Morgan, the leading specialist in the culture and marketing of Christmas trees in the UK. Adrian later became my business and personal mentor and a friend.

After talking to him, he allowed me to understand where I was making mistakes in my tree growing business. It wasn’t until I took a more “hands on” approach to my tree business and made it accessible that I began to realise any degree of success.

The reasons I run my tree business now are less to do with money and a lot more to do with teaching myself assertiveness, self confidence, people skills and making me feel good about the way I am. And I’ve made it accessible, too. Running around my farm and attending to my stock I need an accessible environment. Gates need to swing and I have designed various systems which allow me to open and close them.

I have acquired various machines, a Hydrostatic mower which means there is no clutch, brake or gear stick, this means I can get amongst the trees easily and mow between them. A small Hydrostatic sprayer which has a tank mounted on the back of the unit and a John Deere Gator complete with hand controls.

Certain jobs around the farm are not “viable” for me to approach, for these I have found “Key People”. These are a farm engineer, a tree pruner, an executive salesman, a consultant, an agricultural contractor and during our busy retail period which is mainly at weekends a group of teenagers who come and help man and woman the shop.

For some cool pictures, and more information on the business, look at www.catsfieldchristmastreefarm.com.

Last year, Clive Collins was runner up as Sussex Businessperson of the Year. Despite tough economic times, Catsfield Christmas Tree Farm has seen an 83% increase in sales over the last three years.

Clive works tirelessly within his local community and has worked with special needs students from St Mary’s School in Bexhill who go to the farm for work experience. He also welcomes work experience students from local schools who learn about tree growing. The farm gives trees to several different local churches and to involve local schools with the business, he runs regular competitions to give them the opportunity to win Christmas trees for their schools. Last year a percentage of profits from the sale of wreaths at the farm went to the Spinal Injuries Association.