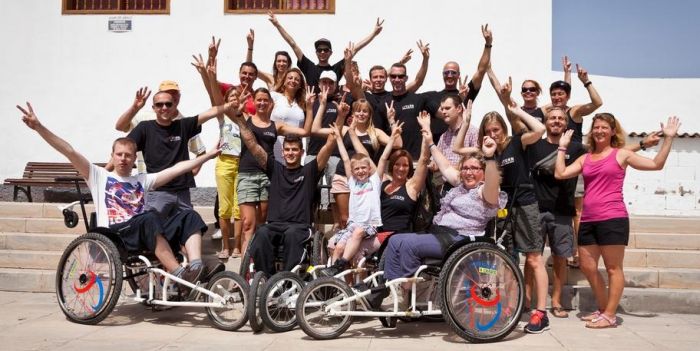 A dozen tourists with a varying degree of physical disabilities have recently spent 10 days in Tenerife practising a diverse range of adventure sports. People with disabilities such as deafness, blindness and paraplegia were able to test their abilities to the limit and participate in some of the island’s most popular activities, including a climb to the top of the majestic Mount Teide, Spain’s highest  peak.

The trip, organised by Project U/Turn, a Belgian NGO specialised in extreme sports, with the collaboration of the Tenerife Tourism Corporation, helped participants explore their huge potential to overcome difficult challenges. Helped by volunteers and special equipment, the group had the opportunity to do kayaking near the impressive cliffs of Los Gigantes, to visit the traditional town of Vilafor, to stroll along El Médano beach and to go up to the top of Mount Teide (3,718 metres), contemplating the stunning Teide National Park (UNESCO World heritage Site) from there, amongst other activites. This is the third trip that the NGO has organised – after previously being in Nicaragua and Morocco – and both the organisation and its members are looking forward to going back to Tenerife in 2014.

Carlos Alonso, Tenerife’s Minister for Tourism, comments: “This project was a total success and highlights the wide range of options that Tenerife offers to those people with varying degrees of disability, as the island gives them the chance to do activities that require a significant physical effort, and this has a positive effect on their self-esteem, self-development and self-sufficiency.”

With trips like this one, Tenerife strengthens its position as an accessible destination. SINPROMI, Tenerife’s Society for the Promotion of People with Disabilities, was established in 1993 and, since then, it has been working on making Tenerife a more accessible place. Nowadays, the island has accessible beaches, museums, parks, hotels, transport and much more.

The video of this exciting trip can be watched here.

The Tenerife Tourism Corporation is a membership led independent body, supported by the public and private sectors, which markets Tenerife overseas as a tourist destination. For general tourism information on Tenerife please visit: www.webtenerife.co.uk