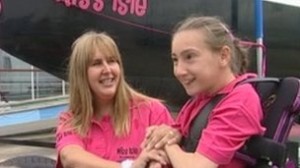 Natasha and her mum

A 15-year-old girl with cerebral palsy has sailed solo around the Isle of Wight, all thanks to a little help from a radio-controlled model yacht and a Shropshire businessman.

Mike Taylor, who runs his adapted toy company Excitim, was first approached by Natasha Lambert’s family two years ago when they told him of the 13-year-old’s dream to learn to sail. Natasha has athertoid cerebral palsy which affects all of her limbs and speech.

Dr Taylor runs a switch-adapted technology business in Market Drayton, distributing adapted toys for people with special needs across the world. Upon hearing of Natasha’s dream, he adapted a radio controlled yacht for her in 2010.

It was this model yacht which taught the youngster how to use the ‘sip and puff’ technique which sends a switch signal to the yacht when she sucks and blows through the switch mouthpiece This method then allowed the determined teenager to sail her 21ft-long boat, Miss Isle Too, around the 50-mile course around the Isle of Wight in 12 hours and 30 minutes on Sunday.

Dr Taylor said it was “brilliant news” that Natasha had gone on to fulfil her dream and it showed disabilities should not stand in the way as was also shown in the recent Paralympics.

“Natasha is a very determined young lady and to have been given the chance to allow her to fulfil her dreams was such a privilege,” Dr Taylor said. “She would have worked very hard over the last two years to perfect the ‘sip and puff’ technique but what a marvellous achievement for her.

“We are proud to have been able to support Natasha and her family and I hope we can help many more young people to fulfil their dreams because anything really is possible.”

Speaking at the completion of the adapted project by Excitim, Natasha’s father Gary Lambert, said: “It’s a brilliant idea and for Natasha to have something that she can really control and play with. She is an intelligent girl but gets really bored and frustrated because she can’t play with any other toys, it’s wonderful to see her now.

“Natasha has not stopped playing with the yacht since she got it, and she can’t wait to go down to the lakes. She’s picked up the controls really quickly.”

Mr Lambert said it was Excitim’s first model sized product which enabled her to learn the skills to sail a yacht.

He said: “We really appreciated Excitim’s input when Natasha was tentatively looking at sailing via the model yacht. We’ve come a long way since then, but it was a perfect place to start and gave her the confidence to carry on to sail full sized yachts.”

The youngster, who raised £8,000 for charity, said her next challenge would be the Atlantic.

To find out about the other switch adapted toys and equipment in the Excitim range visit www.excitim.co.uk.