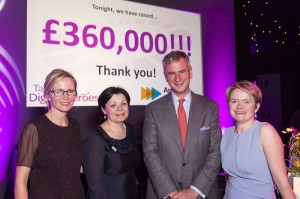 £360,000 was raised at Digital Heroes 2014 at an event hosted by TalkTalk at Supernova in London on 12 November 2014. The money raised will be split between Ambitious about Autism (80%), the national charity for children and young people with autism, and TalkTalk’s Digital Heroes Foundation, which helps local projects using technology to make their communities better. This takes the total TalkTalk has raised for Ambitious about Autism to over £2 million during its 12-year partnership.

The Digital Heroes event was attended by over 340 guests of TalkTalk and Ambitious about Autism and included a live auction hosted by Edward Rising, formerly of Sotheby’s. Auction lots included:

“The TalkTalk Digital Heroes event has exceeded everyone’s expectations again, raising £360,000 for children and young people with autism and the Digital Heroes Foundation. We are very grateful to TalkTalk for its continued support Ambitious about Autism, which has raised over £2 million since 2002. This has enabled our services to continue and for vital new services to be developed to support young people with autism and their families.”

“Our sincere thanks go to all the companies who bought tables, the donors of the exciting auction lots, and the very generous and enthusiastic bidders. In addition, we want to thank TalkTalk’s employees and customers who have helped contribute to this phenomenal total.”

Launched at last year’s auction, the TalkTalk Digital Heroes Foundation was born out of TalkTalk’s belief that the internet can make Britain better off. The foundation aims to support local projects that are using technology for good to benefit their local communities. TalkTalk has now donated in excess of £500,000 to support projects like these. For more information please visit www.digitalheroes.talktalk.co.uk.

About Ambitious about Autism