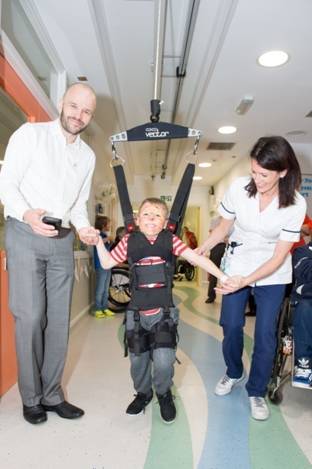 Children with spinal injuries have access to ground-breaking technology to support their rehabilitation, which is being used for the first time in the UK at the National Spinal Injuries Centre (NSIC) at Stoke Mandeville Hospital.

The Bioness Vector Elite system has been installed on St Francis, the children and young people’s spinal injuries ward, in the NSIC. It allows children to safely practise movement such as standing and walking without relying on physical support from staff. The system works by fitting patients into a harness attached to a ceiling track and supports them as they stand or walk, and adjusts automatically to break a fall. This means patients also have more confidence to try advanced skills such as hopping and jumping.

It was the pioneering vision of clinical specialist physiotherapist Kirsten Hart, supported by Dr Allison Graham and the clinical team, which enabled this technology to be brought to the NSIC from the USA:

“A key role we play with spinal injury patients is to help them to achieve their greatest physical potential, including standing and walking. Normally we physically have to support the weight and movement of our patients and this can mean they are reliant on us for their rehabilitation.

“By introducing this new technology, we are providing our patients with greater opportunities to practise safely and independently. It also means we can continue to put physical rehabilitation at the heart of spinal cord injury children’s services.”

Sister Sara O’Shea, ward manager for St Francis ward, has already seen the difference it has made to the families of the children in her care:

“Children’s rehabilitation mainly takes place outside of the ward environment. By having this equipment installed on the ward, the child, their families and ward staff can all be actively involved in what traditionally would have happened in the spinal gym. We are passionate about facilitating a rehabilitation culture which focuses on the ability of all our spinal injury patients, as opposed to disability and, by having the equipment on the ward directly, there is a real sense of enthusiasm as everyone can see the new skills they are developing.”

Bioness’s Matthew Dale praised the ‘vision and drive’ of the St Francis team of the NSIC in acquiring the system, saying: “We are delighted that they have become the first in the UK to adopt the Bioness Vector system – this is testament to the pioneering patient-centred approach employed at the centre.”

In October 2014, Bucks Healthcare became the only NHS Trust in the UK to hold the coveted CARF international accreditation for excellence in the care of spinal cord injury patients at the National Spinal Injury Centre at Stoke Mandeville. The St Francis ward, among the first of its kind in the country, remains the only children’s spinal injury service to be recognised with CARF accreditation in Europe.