Lindsay Clydesdale works for Oxfam Scotland and has just returned from Jordan and Lebanon, working on the charity’s response to the Syria crisis. The UN has called it the world’s worst humanitarian disaster in 20 years. Here, Lindsay explains the additional risk and hardship refugees with disabilities face and how charities including Oxfam are working to help them. 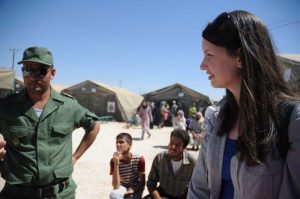 The conflict in Syria is now in its third year and the humanitarian situation for millions of citizens is stark. At least 100,000 people have been killed and almost two million Syrians have fled the violence for refuge in neighbouring countries. Inside Syria, another 6.8 million are displaced and urgently need help.

During July and August I spent time with refugees both inside camps and in socalled temporary settlements, often just a tent, but other families were sheltering in unfinished buildings, an abandoned shopping mall and underground garages. In Lebanon, there are even refugee children living in a cemetery.

Oxfam is working in Jordan, Lebanon and Syria to help those affected, including providing safe water and help with rent and food.

Most of the refugees arrive with only the clothes they are wearing. Imagine having no home, no income and nowhere to go. Many have suffered severe trauma as towns and cities were bombarded before they made the desperate decision to leave Syria. Many have lost loved ones and none of them know when they will be able to return home – or even if their homes are still standing. 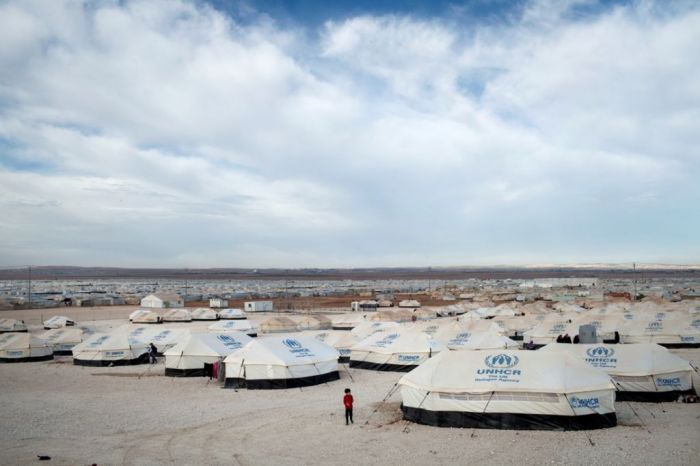 Zaatari refugee camp in Jordan is now “home” to 120,000 Syrians; so huge it is equivalent in population to the country’s fifth biggest city. The camp sits in the Jordanian desert, just five miles from the border with Syria. Summer temperatures regularly reach 40C and getting access to sufficient food, water and any other necessities is a daily struggle. Adapting to life there, in the white tents or cabins that house refugee  amilies, is very difficult, but even more so for those with disabilities and special needs.

Finding those who need help is the first hurdle in a camp this size. Working with the refugees, talking to families and community leaders, and conducting “home” visits, Oxfam has so far been able to identify 110 people with special needs in the two areas of the camp where we are working.

This could be a medical condition, a birth defect, or non-conflict injury from Syria. There are also people with injuries from the war, from bullets and bombs, and some who were held by soldiers or police in Syria and were tortured. Many of the elderly refugees also need support to do basic day-to-day tasks, like collect water or bathe.

In the dusty, hot desert camp, keeping clean is difficult but many of those with special needs can’t stand unaided under a shower, use an Arabic-style (squat) toilet or walk miles to the distribution point for food or a mattress.

Jeffrey Silverman, Oxfam’s public health lead in Zaatari camp, said: “It is challenging for many people with a disability to get the services they need. The agencies working in the camp are overstretched, especially with outreach staff and this creates a long waiting list for populations to be assessed.

“Many of the refugees with disabilities cannot access the medical facilities because they are living too far from it. They cannot get to the distribution sites alone and cannot carry these non-food items to the home  again.

“In many cases, even though there is an accessible toilet in the wash block, they can’t access it from where they live because the ground terrain is too rough and rocky.”

Some of the refugees we’ve identified who need extra support have been living in Zaatari for months before being located by Oxfam, the first NGO to establish their need. From there we give what help we can, providing practical assistance such as commodes or adult and child nappies for disabled people who cannot leave their tent or caravan, and refer them to medical charities in the camp who can offer targeted treatment or advice. 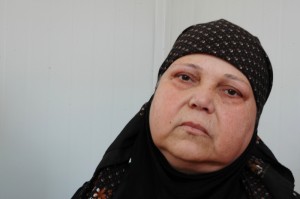 We also make sure facilities we are building in the camp, like shower and toilet blocks, include accessible cubicles. There is one specially designed toilet for people with disabilities and the elderly in each block
built by Oxfam. These have sit-down toilets, support rails, larger cubicles and wider doors. These basics are hugely important as hygiene, particularly in the Middle Eastern heat in a densely populated camp, is vital to prevent the spread of disease.

The facilities also give back some measure of independence and dignity, which is very important.

Jamila, who is in her fifties, has been unable to walk since she suffered from a slipped disc and developed complications with her knee. Toilets and washrooms are far away from her caravan in Zaatari camp but a new wash block built by Oxfam just a couple of metres away will make her life easier.

She said: “It’s been very hard for me to get to the toilets and showers as they were located very far away. My relatives had to carry me long distances but thankfully the new washing facilities mean I will be able to get there in a matter of seconds.”

Demand for basic items like commodes and wheelchairs far outstrips supply but Oxfam is working with other aid agencies to try and help as many people as possible. We have begun distributing wheelchairs donated by Mercy Corps and FreeWheelchairMission.org who have developed a chair for all terrain movement. Other agencies like Handicap International assist with wheelchairs and physical therapy for some of the disabled refugees and the camps’ health centres also provide some support. But there are still people waiting for help. 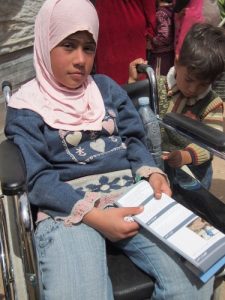 Fatima, 39, has five children, one of whom is disabled and her greatest need is to acquire a wheelchair for her daughter. Sidra, aged 12, is paralysed from the waist down and Fatima had to borrow a wheelchair from a neighbour in the camp to take her to hospital. The family arrived in Zaatari in April, fleeing Syria because the fighting made it increasingly difficult to get medical help for Sidra. Her father has remained behind, hoping he will still be able to work and earn money for his family.

“Whenever there were attacks or bombings, people would go and hide in the shelter but my daughter couldn’t do that. Someone would have to hold her and stay with her. Without God’s mercy we would have been bombed and died long ago. Just the thought of my daughter being safe and secure here now is worth everything.”

Oxfam has helped more than 250,000 people in Jordan and Lebanon so far and we plan to reach 650,000 by the end of the year. However, we need funds to scale up our work and the £35m appeal we launched for Syria in June is less than a third funded. Providing the help disabled people need is dependent on financial support so that refugees like Jamila and Sidra can stay healthy and live with dignity, for however long they need to call Zaatari home.

HOW YOU CAN HELP

£3 can buy someone a hygiene kit which includes soap and washing powder.

£30 can buy a water filter to give a family safe drinking water.

A commode costs around £46.

£50 can give a family enough food to fight hunger for a month.

£100 can help provide a family with a roof over their head for a month.

More information on Oxfam’s work and how to donate can be found at www.Oxfam.org.uk/Syria