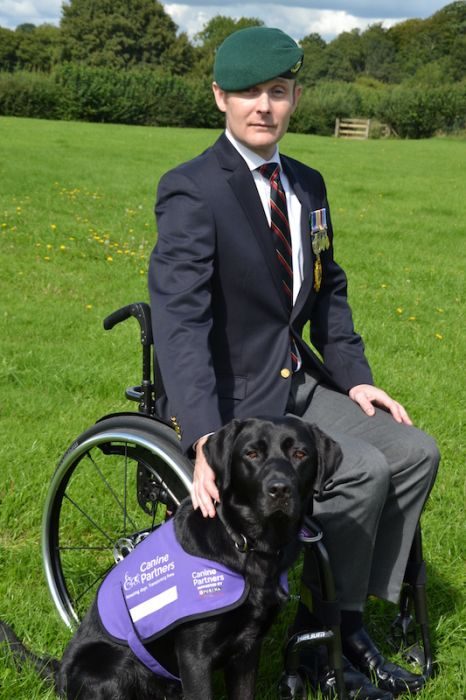 Former Royal Marine Jon Flint is hoping to shoot to victory at the 2016 Invictus Games this week.

Jon, 40, from West Sussex, has travelled to Orlando, Florida, to compete in archery and swimming events at the international multi-sport event open to wounded, injured and sick serving personnel and veterans.

Prince Harry, who set up the event, made a friend when he bent down to rub Jon’s canine partner Jester’s stomach at the unveiling of the team at Buckingham Palace, London, last month.

Jon, who was paired with Jester thanks to a partnership between Canine Partners and Help for Heroes, said: “He’s not the first of my dogs to catch Prince Harry’s attention! My previous assistance dog Varick, who very sadly died suddenly last year, barked all the way through Prince Harry’s speech last year! The prince was lucky as Jester doesn’t roll on his back for anyone!

“I am excited to compete at the Invictus Games again. Archery is very good for mental focus and the swimming is good for my fitness.”

Jon lives with spinal injury and now relies on Jester to help him with tasks such as opening and closing doors, undressing, pressing buttons, retrieving items and other everyday tasks that he finds difficult, painful or impossible to do for himself.

While on an exercise on the Isle of Skye in 1996, Jon fell around 30 feet whilst abseiling at night and broke his back. He did not realise about the damage until 2010. Jon took the decision in 2007 to leave the Corps for personal reasons and pursue a career in civilian life. He was was still very active, walking the dogs with his wife Sarah and playing rugby for his local team.

Jon, who has undertaken operational tours in Northern Ireland, Iraq and Afghanistan, said: “As I am over six feet tall and walk upright, a lot of people don’t see my walking stick, and one of the symptoms of my injuries – I have now been diagnosed with a condition called failed back surgery syndrome, meaning I am in constant pain – is that I have poor balance, so if people knock into me it won’t take much to make me fall.  People don’t necessarily realise I’m disabled, but I can be very vulnerable when I’m out among crowds. I’m in pain all the time and have to take a lot of heavy medication, which really slows me down and can make me forgetful.  My life now is a choice between pain or being alert enough to function properly.

“After Varick died I didn’t know whether I could commit emotionally to another dog as he left such a big hole. But having an assistance dog isn’t just about me; it’s about my family as well. Jester is amazing and picks things up for me and will go and get help if I need it. It is about giving my family the freedom as well. When I decided I was ready for another canine partner I gave the Charity of a list of tasks I needed but said that I wanted a dog with character too – and they got it right with Jester, he is definitely the right dog for me!

“I called Varick my ‘Black Shadow’ because he went everywhere with me. I call Jester my ‘Sunshine Boy’ because when the sun comes out I get my shadow back.”

Jon competed in archery at the first-ever Invictus Games last year in London but will be competing in swimming for the first time. The University of Portsmouth undergraduate student has been training with Fareham Nomads Swimming Club in the lead up to the competition.

Jonathon Giemza-Pipe, who lives with canine partner Toby on the Isle of Wight, will also be competing at the Invictus Games when he competes in archery.

To date, Help for Heroes has provided funding for eight Veterans to have the support of a canine partner. These amazing dogs have changed the lives of those they are helping: restoring independence, giving family members peace of mind, allowing their disabled partners to return to work and even saving lives by responding in emergencies.

To find out more about Canine Partners, which does not receive any government funding and relies on donations, please visit caninepartners.org.uk.

Confused by your Christmas gadget? RNIB Technology Support Squad to the rescue

Disabled students say employers have ‘no idea’ about disability