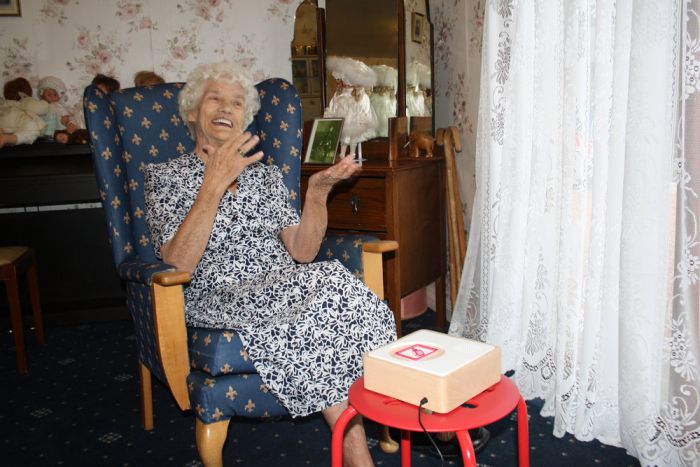 Residents at Bupa’s Balcarres Care Home in Dundee have played a key role in developing an audio invention that could benefit millions of people with dementia.

Stephanie Post, a fourth-year student studying Digital Interaction Design at Dundee University, worked with the Bupa care home team to help develop ‘Sound Sparks’, a unique audio player device which helps people with dementia connect with sounds from their past.

The final design was completed when Stephanie, 22, worked with 86-year-old resident Jean Milton – using her life history to develop a programme of familiar sounds from her memories.

Stephanie’s invention resembles a speaker box and works with a series of pre-programmed coloured tags, such as an old-fashioned microphone or a movie camera, which play recorded sounds when they are placed on the device.

By working with Jean and her family at Balcarres Care Home to compile memories of her past, Stephanie developed the tags to play various tunes to stir memories, such as ‘40s music when the microphone tag is activated, quotes from the film Casablanca using a camera tag, and school reminiscences using a school satchel tag.

Stephanie, from Dundee, said: “When I started the project I wanted to help communication among the residents who have dementia, to help them connect with their families and trigger a memory for them. I’m incredibly happy to say that all of this has happened with Jean.

“It was particularly rewarding to see Jean’s family reacting so positively to the effect that the radio had on her. Seeing how happy they were made all the hard work worthwhile.

“The idea of the ‘Sounds Sparks’ audio player came to me after I spent some time researching dementia. I looked at what had been done already, and found there isn’t much technology that’s been created for people who are living with.

“My great aunt also has Alzheimer’s – a form of dementia – another reason why I was keen to look at a concept like this.”

Stephanie, whose invention has been completed just ahead of Dementia Awareness Week (June 3-9), said she believes Sound Sparks could have great benefits for people with early and mid-stage dementia.

“Sounds Sparks is a fantastic way of allowing people living with dementia to reminisce about their life history and to allow them to recall sounds from their past – something that is so important in dementia care.

“We are thrilled to have played a part in Stephanie’s exciting invention.”

Both Lynn and Jean will join Stephanie when she takes her design to her degree show at Dundee University in mid May, before taking it to London for the New Designers Exhibition in June where graduates get a chance to showcase their inventions.

About Bupa Care Services in Scotland

We have 30 nursing and residential care homes in Scotland, where we look after over 2,400 people. For more information, visit www.bupa.co.uk/care-homes.

Text with your nose to promote digital inclusion