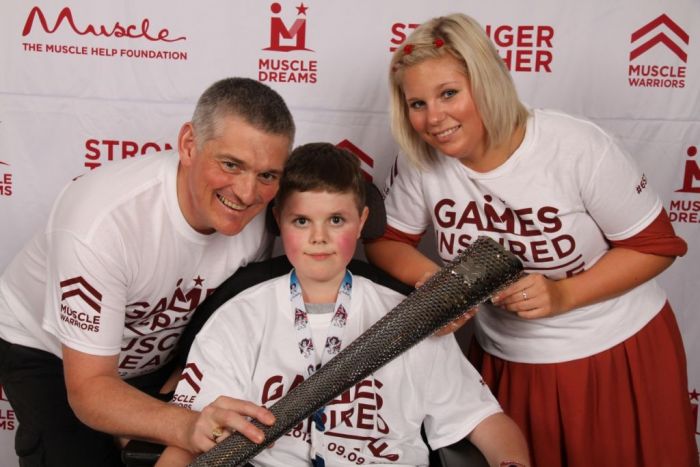 The Muscle Help Foundation today announces the online premiere of ‘STRONGER TOGETHER’, an inspirational film that provides an insight into how the lives of 75 people with Muscular Dystrophy were changed as a result of the Paralympics.

The Muscle Help Foundation (MHF) is a small family charity which delivers amazing and unforgettable experiences in the UK called Muscle Dreams for children and young people afflicted by the muscle wasting disease, Muscular Dystrophy. Today sees the launch of their short film on the charity’s flagship 2012 ‘Games Inspired Muscle Dreams’ (GIMD) programme.

The film which premiered at midday through the charity’s YouTube Channel at http://youtu.be/NrQPXtAjGb4 was produced and sponsored by one of the charity’s supporters, award-winning meeting and events agency Zibrant. It provides a compelling insight into the lives of 75 children and young people with the muscle wasting disease Muscular Dystrophy (along with their families) who successfully applied online through a bespoke nomination system.

Muscular Dystrophy affects over 70,000 people in the UK and varies in complexity with no known cure. As part of the charity’s on-going work, this innovative Paralympic related project was in development for over two years and was conceptualized by MHF’s inspirational CEO.

Over the 10 days of the London 2012 Paralympic Games, the programme provided beneficiaries with lasting memories and played an important part in driving some exciting legacy initiatives. Most recently, the establishment of a team of Powerchair Football players called Muscle Warriors, all of whom have the most severe form of muscular dystrophy known as Duchenne or DMD. The disease affects the heart and respiratory muscles in around 1 in 3500 boys resulting in muscle degeneration and eventual death.

Commenting on the video, Michael said: “The video highlights what a fantastic 10 days we had at the Paralympic Games, how lives have been changed and how people can get involved to support our work.”

If you’re inspired by the film, you can find out more about the charity at www.musclehelp.com.