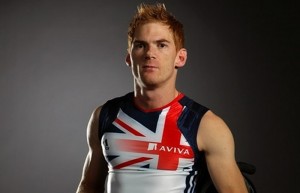 The North East is set to honour one of its most commended athletes for his ambition, dedication and charitable nature, in an event hosted by an organisation with which he holds a close bond.

Stephen Miller, one of the regions most decorated athletes and three time gold medallist, gears up to receive the Silver Heart Award for his inspirational life-story and ongoing support to Variety, the Children’s Charity.

Miller, from Cramlington, was born with cerebral palsy and has represented his country at five straight Paralympic Games – including London 2012 where he captained the male athletics team. Now the three time gold medallist club thrower is set to be awarded the Variety Silver Heart at a black tie event at the Newcastle, Gateshead, Hilton Hotel on July 18th. The award will be another accolade to add to his hugely successful career haul of 25 international medals –including, of course, Stephen’s three back-to-back Paralympic gold medals.

The black tie evening at the Hilton will feature a drinks reception, three-course meal as well as entertainment from popular regional musician and ‘The New Face of Swing’, Glen Roughead alongside The Paul James Band and will of course see Stephen Miller awarded the prestigious Variety Silver Heart. It is set to be a night of inspiring speeches and personal tributes, presenting Stephen as the true personification of perseverance and success.

Stephen’s first gold at the Atlanta 1996 games meant he became Great Britain’s youngest ever gold-medal winning athlete. His second and third wins followed at Sydney 2000 and Athens 2004; the third of which, Stephen says, is his career highlight.

“It’s a great privilege for me to be chosen to receive this brilliant award. Everything I do in my life I do because I want to and I enjoy it, I never expect to get awards so this is a great surprise. I know it will be a special night for me and my family and friends and I hope lots of people will come and celebrate with us.”

The paralympian has a lifelong affinity with the region, having been born here and associated with Gateshead Harriers athletics club for almost his entire career, and has freedoms of Cramlington, Gateshead and Northumberland.

Following a hip replacement to fix an injury, which resulted in a disappointing 11th place finish in London, Miller is back in training and raring to regain his place as Paralympic club throw champion in Rio 2016.

Stephen, who says one of his biggest inspirations in sport is 1992 100 metres champion Linford Christie, is set to follow in the footsteps of fellow local heroes Tim Healey, Denise Welch and Joe McElderry in being awarded The Silver Heart Award thanks to his support for Variety – a charity that improves the lives of children by raising funds for those that are sick, disabled and disadvantaged.

The work Stephen carries out supporting disability sport has certainly had a bearing on the award. He is Managing Director of SMILE Through Sport, an organisation he founded with wife Rachel in November 2013. SMILE was created to ultimately improve the perception and culture surrounding disability sport- inspiring and encouraging individuals.

Working both locally and nationally, SMILE aims to inspire, educate and provide enjoyable participation across disability sports, baring similar values to those of Variety, who have funded uncountable facilities for local disability sports schools alongside their sky blue specialist minibuses known as ‘Sunshine Coaches’. The coaches truly do transform lives, transporting youngsters and their carers to different activities, field trips and sporting events around the country allowing them to see the world and live the life they deserve.

Tickets for the night are available through the Variety main office on 0191 214 5959 or alternatively you can contact them via email on north@variety.org.uk, and are priced at £40 per head or £400 for a table of 10.

Find out more about Variety at www.variety.org.uk

Only four clubs in the Championship meet the needs of wheelchair supporters, finds Revitalise