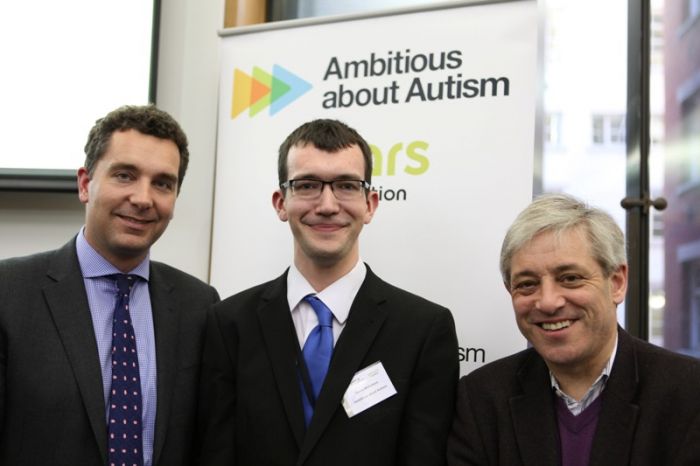 The Minister assured the audience that Statements of Special Educational Needs will retain their current legal status until local authorities are able to replace them with the proposed Education, Health and Care Plans. He also answered questions from young people with autism and their parents and carers about their concerns. The Minister’s speech came as the Children and Families Bill – which marks a significant change to special education needs policy – goes through Parliament.

Also speaking at the Pears Ambitious about Autism Annual Lecture was David Nicholson, Youth Patron for the charity, who discussed his aspirations and the potential impact of the Bill. The event was chaired by Robert Buckland MP, Chair of the All-Party Parliamentary Group on Autism, and York Council’s Head of Integrated Services for Disabled Children Jessica Haslam shared examples of good practice. Speaker John Bercow MP, who is a Parent Patron for the charity, also attended the lecture.

Minister for Children and Families Edward Timpson MP said: “To ensure a smooth changeover, we believe a phased approach will be needed to transfer children and young people with existing Statements and Learning Difficulty Assessments to Education, Health and Care Plans. These changes will need very careful consideration and we’re gathering views from interested parties to find the best way forward. We’ll set out details of our preferred approach in a draft order which will be subject to formal consultation later this year.

I’d like to reassure those worried that existing statements could lose their legal status during transition. I’m clear that existing Statements and Learning Difficulty Assessments will retain current legal rights until they’re replaced by Education, Health and Care Plans.”

Mark Atkinson, Director of Policy and External Affairs at Ambitious about Autism, said: “We hope the Government does not miss this unique opportunity to genuinely deliver support and aspiration for all disabled children and young people for generations to come.

We’re pleased the Minister reassured families that they will still have the protection of Statements of Special Educational Needs until the new system of Education, Health and Care Plans is up and running, and that existing legal duties will be protected. This will reassure many parents who’ve told us they are concerned about support suddenly ending.”

David Nicholson, Youth Patron for Ambitious about Autism, said: “My ambitions are to get married, get a nice house, have children and become a Member of Parliament. I am aspirational. I think that is apparent and I’m not apologising for that. I have a very strong belief that every single autistic and disabled young person in the UK should be able to fulfil their dreams and hopes.”