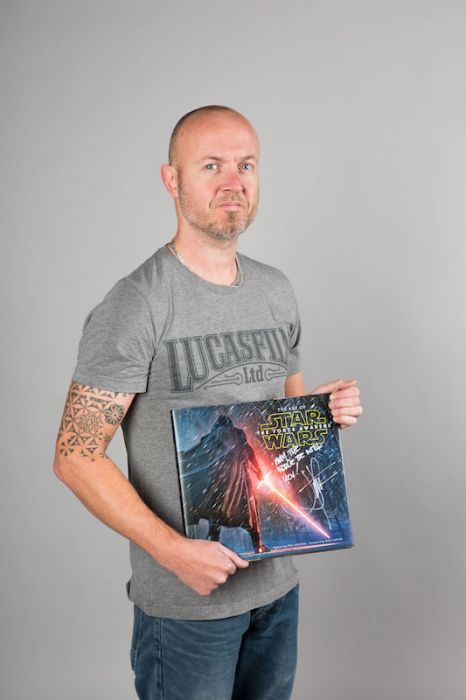 A film industry prop maker, who has spent eight months collecting the celebrity signatures of the cast and crew of the iconic Star Wars films, including Harrison Ford, Daisy Ridley, Adam Driver and John Boyega, is to give it away for charity, with the proceeds going to the national disability charity Sense.

Lifelong Star Wars fan, 43 year-old Neil Ellis, from Elstree, Hertfordshire, landed his dream job when he started work for Lucasfilm as a concept model maker and specialist in the costume FX department. His work on the new films, including last year’s ‘Episode VII’, and this year’s Rogue One, sparked the autograph idea, and he says he quickly decided that he wanted to do it to benefit people with sensory impairments, a specialist area for Sense.

Neil said: “It dawned on me that kids who are deafblind will never be able to appreciate all the things that make Star Wars so amazing. I know it’s the least of their worries, but it’s just another thing that they must miss out on. I’m working in such a creatively rich environment, I couldn’t imagine not being able to appreciate the visuals of movies and their soundtracks.” 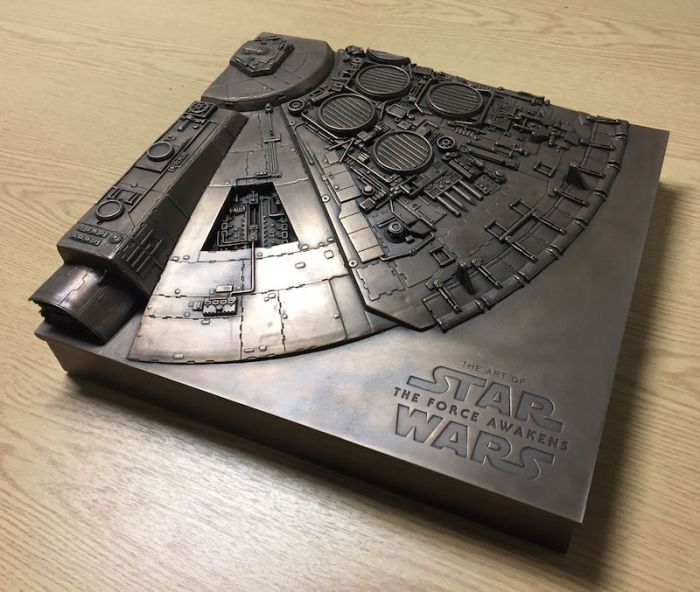 The autograph book, which also includes Mark Hamill, Carrie Fisher, Anthony Daniels and Kenny Baker from the original series, and new series’ directors Gareth Edwards and Rian Johnson, is displayed in a spectacular ‘Millennium Falcon themed’ bronze-cast that Neil has designed himself.

Rather than auction the book off to the highest bidder, Neil has made the decision that every fan should have an equal chance to win it. The public are being invited to make a minimum donation of £5 to Sense through Neil’s fundraising page, with one lucky donor being selected at random by Neil to win the prize on May the Fourth: Star Wars Day (4 May 2017).

Neil says his friends and family have been supportive of the autograph hunt, despite it taking up so much of his time, but do question one thing – “They think it’s great idea, but do keep asking why I didn’t do two copies of the book, so I could keep one for myself!”

Sense Deputy Chief Executive, Richard Kramer, said: We’re incredibly grateful that Neil has chosen to support Sense. Not everyone will be lucky enough to win the prize, but they can be certain that the donations will go towards supporting people who are deafblind, have sensory impairments or complex needs, to enjoy more independent lives.

We know that with the right support, people with complex needs can enjoy and experience many of the everyday things that we take for granted, such as going to the cinema. Accessible screenings, audio description dialogue that describes scene changes and subtitles can all help.  We also have some big fans of Star Wars across Sense, so this has created a real buzz around our organisation”

To make a donation to Sense and be in with a chance of winning Neil’s autograph book, visit: www.justgiving.com/fundraising/Autograph-Book.

There are over 150 autographs in the book to date.  To see them all, visit: theartoftheforceawakens.blogspot.co.uk

Sense is a national charity that supports people who are deafblind, have sensory impairments or complex needs, to enjoy more independent lives. Our expertise in supporting individuals with communication needs benefits people of all ages, as well as their families and carers. We provide information and advice, offer a wide range of flexible services and campaign passionately for the rights of the people we serve. Find out more at www.sense.org.uk.