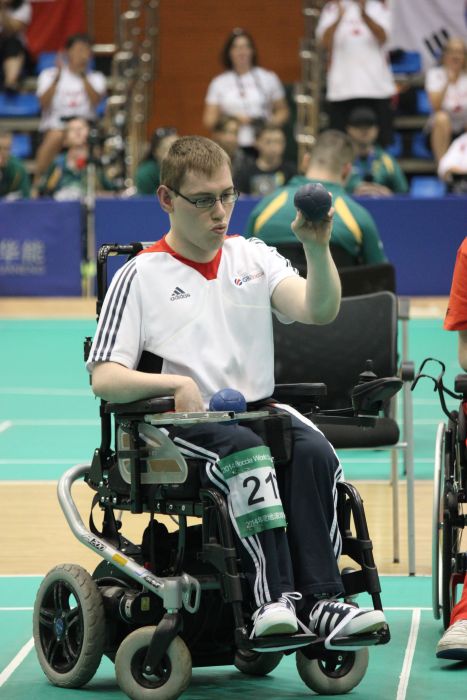 Sport is an incredible thing; not only is it fun, healthy and sociable but it can also change lives. That is exactly what happened to Joshua Rowe who has Cerebral Palsy and uses a wheelchair to get around.

In 2006, at the age of 13, Joshua’s school passed a leaflet on to him about a Scottish Disability Sport Summer Camp where he could try out and take part in various disability sports. He went along to see what it was all about and this is where he found Boccia. Little did he know that was to be the start of his sporting career. Thinking back Joshua said, “It’s funny how things just happen.”

Boccia is wheelchair sport which isn’t too dissimilar to the French game boules. The aim of the game is to throw leather balls as close as possible to a target ball, or jack. The ball can be rolled, thrown, kicked or if a player is unable to throw or kick the ball they can use a ramp. The game is played indoors on a Boccia court which is about the size of a badminton court (or any suitable flat area). Boccia is played by two sides that compete as individuals, pairs or teams of three. Boccia is a strategic game that is unique to wheelchair users and is a sport that tests muscle control and accuracy.

Joshua picked up the sport really quickly and had been doing so well that just a few months after taking up the sport he was invited to join the Scottish Boccia Squad.

Joshua kept going from strength to strength and in 2010 he was invited to a Talented Athlete Fast Track training programme. The programme was set up to find and train people with a talent for Boccia in the lead up to the 2012 Paralympic Games in London. Joshua went on to win bronze at the British Championships in 2010 and by the end of the year Joshua was offered a place on the GB Squad. This was a huge milestone for Joshua.

Unfortunately Joshua was not selected for TeamGB for the London games having only narrowly missed out on a spot. This however did not deter him. He carried on training and four short years later Joshua was selected to represent Great Britain at the 2016 Rio Paralympic games which was his debut as a Paralympian.

“I still don’t quite believe it,” said Joshua just after getting the news. “I was speechless when I got the call. I was in shock, particularly as I wasn’t selected for London, so it was just amazing to finally make it. I had watched the 2012 games and it really hammered it home that getting to the games was what I wanted to do. Since then I was even more focused on doing my best at everything required of me in order to better my chances of selection for Rio.”

Back in 2012 Joshua was still using his NHS prescribed wheelchair for Boccia. Joshua needed to travel a lot by plane to various training camps and competitions and explains how this became an issue for him. “In 2010 I travelled from Edinburgh to Bristol every four weeks for training camps. It was a pretty routine journey for me. Then one day I turned up for my flight, as I had done so many times previously, and they refused to take my chair. The NHS chair is pretty big. After a bit of toing-and-froing I finally found out it was because my chair was too heavy. They had changed their restrictions and would now only take chairs that are 60kg or under. As I needed to get to the final fast-track training camp before selections for the GB squad, my chair had to go from Edinburgh to Bath in a taxi.”

Because of that incident Joshua needed to find a chair that was under the airlines weight limit. The charity Whizz-Kidz helped Joshua and in the end he chose the Ottobock A200 powered wheelchair.

“It was just want I wanted. It’s compact, easy to travel with and it suits Boccia down to a tee,” explains Joshua. “Up until that point I had been playing in a massive chair. On a Boccia court you play from marked boxes; you have to ensure that your chair and wheels stay inside the lines. With the A200, as it was smaller, it meant I didn’t have to worry as much about trying to keep my wheels inside the box lines.”

The A200 is the most compact power wheelchair in its class. The high-quality power wheelchair offers many adjustment options and can be adapted precisely to personal requirements. It can be taken apart in just a few steps so that it even fits into the trunk of a Smart car. The entire electronic system is integrated in a single box. This means no annoying cables to deal with. Because it is so compact the A200 power wheelchair offers great independence. It is only 57 centimetres in width, which ensures ease of movement, whether that be in the office at home or on the Boccia court.

Joshua continues, “It is handy because I can go up small curbed pavements in it, so when I am out and about it’s so much easier to get around as I don’t have to always look around for an accessible route.”

Joshua spends most of his time training. “It is pretty full on. I spend 10-12 hours per week training on court and I go to the gym and to physio,” remarks Joshua. But when he does have some spare time he likes to go out to the theatre and watch movies. “I enjoy chilling out with a film. It gives me that down time where I can switch off from Boccia.”

This has been an incredible journey for Joshua and after a well-deserved break he will be back concentrating and training hard for the next Games in Tokyo in 2020. For Joshua this has been a dream come true. “Never in my wildest dreams would I have imagined I would be where I am today. If you told me eight years ago that in the future I would be a Paralympian I would have told you that you were mad,” Joshua said.

From his experience Joshua would suggest to those who want to be more active, “If you are interested in a sport go and try it and have fun. When you are starting fun is definitely the most important bit. If you want to do it more seriously, you just have to keep trying. There will be ups and downs but if you keep at it and believe in yourself, believe that you are capable of doing it, you will keep progressing and it will all pay off in the end. But remember, above all enjoy yourself. If you love what you do you’ll get enjoyment out of it and that’s the best bit.”

For more information about Ottobock’s range of products and services visit: www.ottobock.co.uk.