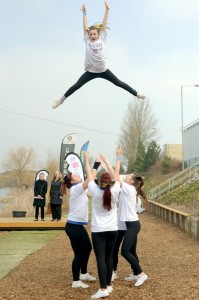 Hundreds of thousands more young people are to benefit from the sporting legacy after Sport England announced an extra £24 million to expand and extend its successful Sportivate programme.

The National Lottery funding means Sportivate can continue helping 14- to 25-year-olds to get involved in sports from judo and tennis to wakeboarding and parkour until 2017.

The announcement was made at an event in Essex to celebrate the first two years of the initiative attended by Olympic Gold-medal winning cyclist Joanna Rowsell, the Rt Hon Maria Miller, Secretary of State for Culture, Media & Sport, and Sport England’s Chief Executive Jennie Price.

New figures published today show almost 190,000 teenagers and young adults have so far benefitted from free or discounted six-to-eight week sport courses through Sportivate. Of these, 156,547 have successfully completed their coaching course, missing no more than one session.

Joanna Rowsell said: “It’s fantastic that Sportivate is helping so many young people to discover a new sport. I only started cycling when I was 15 and it changed my life. Sport can be amazing if you find the one that’s right for you.  Whether you want to get serious about it or concentrate on the fun of taking part, Sportivate can help you to get involved.”

Jennie Price, said: “Sportivate’s success is built on listening to what young people want from sport and then giving them great opportunities to get involved. With dozens of traditional and non-traditional sports on offer, lots of young people are getting active and discovering a sport they really enjoy and want to keep playing.”

Today’s announcement was welcomed by Maria Miller, who said: “The number of people playing sport is on the rise, which is really good news.  We are determined to leave a lasting legacy from London’s Games, and Sportivate is playing a key part in that.  It’s really important we keep the momentum going and help even more young people develop a sporting habit for life.”

Sportivate is being delivered by the network of 49 county sports partnerships, working with local clubs and providers.

Today’s event in Basildon was hosted at Festival Wakeboard Park by Active Essex, where a successful wakeboarding Sportivate project is based. The initiative has already introduced more than 140 young people to the sport, with several youngsters so inspired that they’ve now qualified as instructors.

Active Essex Chair Gary Sullivan, said: “We thrilled to be hosting this celebration of two years of success for Sportivate. The programme is a fantastic incentive for young people to get into sport and be more active. At Active Essex, we are committed to delivering a legacy from 2012 by providing more sporting opportunities for young people and we are very proud of the positive impact that Sportivate has had on our participants, contributing to a sustainable legacy for the county.”

Other successful Sportivate projects include:

Find out more about the Sportivate programme by clicking here.