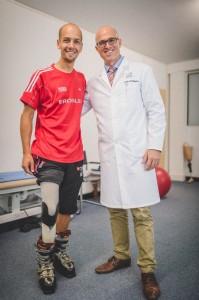 London amputee Matthew Short hopes to realise a Paralympic dream thanks to a specialised prosthetic skiing leg developed by The London Prosthetic Centre.

It was 2007 when 22-year-old Matt, who is currently training to be a solicitor, received the devastating news that he had bone cancer. Despite months of treatment, it was decided in March 2008 that he needed to have his leg amputated below the knee.

Following the surgery Matt was given the all-clear, only to experience a relapse in 2010. Determined to overcome the disease, Matt underwent additional treatment and having made a full recovery, felt keen to make a return to sport, which he had always enjoyed prior to his illness.

Having skied throughout his life, Matt felt that he had the skill to take it up again and that his body could handle it. He has since skied with the British Disabled Ski Team over the past few years, recently experiencing his first season of racing as an independent.

He also joined Heather Mills and the team for training in March this year, which proved an incredible experience as he explains:

“Skiing with the development squad was fantastic and joining the team is something that I’m very keen to do. I’m still fairly new to it all, but I’m hoping to be good enough to take part in the 2018 Paralympics.”

However, Matt feels that his NHS prosthesis has been holding him back on the slopes. He continued:

“My NHS leg is very good and allows me to engage in a range of activities, including playing squash at work, walking and running, but it’s not well-suited to skiing. When using ski boots, the prosthesis doesn’t provide much security at all, and skiing requires a completely different angle for me to be able to put force through the ski. The awkward positioning also means that I’m constantly at risk of dislocating my knee if I have a fall.”

Whilst Matt was skiing with the development squad, he spoke to Heather Mills, who is the only other amputee on the team and claimed the Super-G Austria Cup title last year and four gold medals at the US Adaptive Alpine Skiing National Championships in Aspen, Colorado.

She recommended a visit to The London Prosthetic Centre, who worked closely with her to develop a specialised skiing prosthesis which could withstand the harsh racing conditions. Heather put Matt in touch with Consultant Prosthetist at the clinic, Abdo Haidar, and the design of Matt’s new leg is well underway.

Abdo said: “The key benefit for Matt will be that this new leg has been specifically designed for skiing, and to meet his exact requirements. The newly designed socket and brace will give him the control and manoeuvrability to make turns with complete confidence and tackle the slopes with ease. The positioning of the leg will also ensure that there is no risk of Matt damaging his knee.

“We’re looking at a completion date of early September, and I’ll be visiting the indoor skiing slope at Hemel Hempstead to watch Matt ski and make any alterations. Our aim is to provide Matt with the ideal solution, to help him achieve his goals on the slopes and embark on his Paralympic dream.”

Matt added: “The London Prosthetic Centre has been fantastic. They’re incredibly efficient and they really know what they’re doing – much more than me and I’ve been an amputee for five years! They’re working very hard to fine tune the design of the leg at every stage and I am very confident that they’ll deliver on exactly what I need.”

One Game, One Love: Tennis project is huge success for disabled youngsters