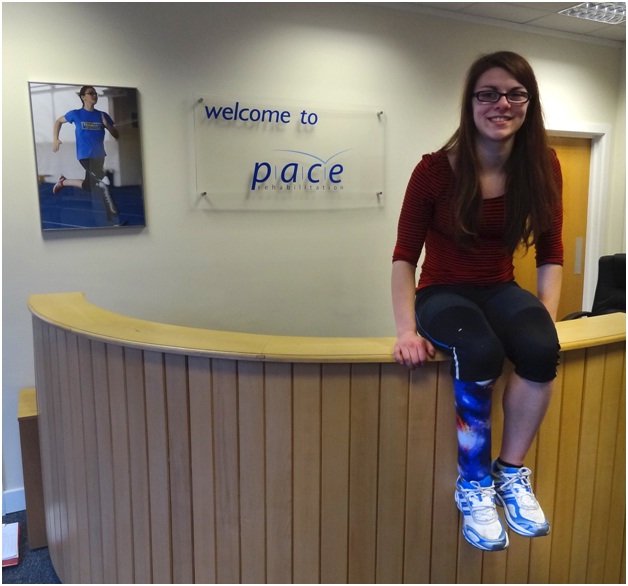 In May 2012, when aged just 15, Bath’s Sophie Kamlish sprung onto the international Paralympic scene as she won a bronze medal in her first ever international event, at the Paralympic World Cup in Manchester.  This proved to be just the beginning.

As Sophie modestly explains: “Thanks to funding from READY (Recreation and Easy Access for Disables Youth), Pace Rehabilitation provided me with a specific running leg that enabled me to progress to the next level.”

Up to this point Sophie had trained and competed on her every day prosthesis.  However, armed with her new bespoke device, which incorporated an Össur© Cheetah sprint foot, the improvements in Sophie’s athletic performances were significant.

Following her inaugural international appearance, just a few months earlier, Team GB selected Sophie for the 2012 Paralympics in London.  Despite the huge pressure of competing in front of 80,000 people in the Olympic Stadium, and the worldwide media coverage, she successfully qualified for both 100m and 200m (T44) finals.  Despite her inexperience, she achieved very credible 5th and 6th places in the respective events.

Sophie’s fast-track Paralympic achievements didn’t go unnoticed, as Scott Richardson, Pace Rehabilitation’s Business Development Manager explains: “It was incredible that Sophie had come so far in such a short time.”  He continued, “We wanted to recognise her achievements and give her the best opportunity to continue to develop.”

Following some discussion with her parents, Ros and Steve, Scott learnt that other than at school, Sophie didn’t walk very far on her ‘every day’ prosthesis, due to comfort issues.  As Scott recalls, “It was ironic that a Paralympic sprinter was struggling to walk about on a daily basis!”  He continued, “With excellent cooperation from Össur UK, who agreed to provide a Low Profile Vari-Flex foot, we extended our support and provided Sophie with a new ‘every day’ prosthesis”.

Pace prosthetist Paul Richardson said: “If we could provide Sophie with a more comfortable prosthesis for her everyday life, she’d hopefully be in better condition, both physically and mentally, for her sporting activities.”

Following a successful home trial with a check socket and the new foot, Sophie advised Paul of a funky material she’d like the finished article covered with.  As Paul said: “We often produce personalised finishes, so we were more than happy to cover Sophie’s device with her cosmic pattern choice.”

Össur UK Sales Manager, Paul Jamieson, was invited to Pace Chesham when Sophie took delivery of her new device.  He said: “We are really pleased to have worked with Pace and Sophie to fit the new foot, and look forward to working together in the future.”

A few days afterwards, Sophie emailed Pace and said: “The leg is superb.  I’m very happy with it and really do appreciate the whole team’s effort.  Thank you!”.  Adding: “Not only is my new leg loads lighter, it also has a really awesome design. Walking around will be so much easier now.”

Everyone who has been involved in supporting Sophie with her prosthetic requirements, wishes her the very best of luck, both on route to the 2016 Paralympics in Rio and in her busy everyday life!

As one of the UK’s leading independent rehabilitation providers, Pace’s business is built on converting patients into people and assisting them in re-claiming their lives following life changing events.

A large proportion of Pace’s work is providing rehabilitation to people with amputation or limb absence at any level, from partial foot and fingers to through the hip or shoulder, though its multi-disciplinary team of clinicians.

Find out more at www.pacerehab.com