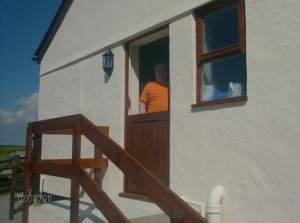 A rural care community in Cornwall has come up with a novel way to support one of its residents – by building him a new home from a former chicken shed.

Due to his autism Simon, 29, found it difficult to cope with the challenges of living around other people.

“Simon’s condition means things we all take for granted, such as being around other people, were just too much for him,” said Jenna Betts, service manager at Highdowns, near Camborne.

“He found it difficult to live in close proximity with other residents as it made him anxious.

“We knew communal living was putting pressure on Simon and we desperately wanted to do something to support him.”

It was then Regard’s operations team came up with a possible solution – converting a chicken shed on the site into a new home for Simon.

“It seemed a bit left field, but the more we thought about it, the more we realised it might be just the solution we were looking for,” added Jenna.

“It wasn’t too far from the three other residents’ properties on the site, but crucially had its own space.

“We approached Simon to see what he would say and we were delighted when he told us he thought it was a brilliant idea.”

Simon is one of 14 residents at Highdowns, run by independent care provider Regard, where people live in a mix of properties, including a main house, cottage, a step-down unit and Simon’s new accommodation..

It took four months to convert the outbuilding into a home for Simon, complete with kitchen, sitting room, bedroom and bathroom.

Simon was actively involved in the project from the start and helped with the building work and even chose the shade of paint he wanted.

He is now celebrating his first anniversary living in his new home, known as Roosters, and says he is very happy.

“I like it because I can play my music as loudly as I want,” said Simon. “I have my own space and like not having other people around me. I like to practice on my CD mixer in my own home.”

Simon likes DJing and is currently gearing up for a Halloween gig at Highdowns.

Meanwhile the shed’s former feathered occupants have been moved to a new home in a nearby barn.

Highdowns is set in 10 acres of countryside and promotes and encourages independence and integration into the community. Founded in 1994, Regard operates more than 120 supported living and residential care services across England and Walesfor people with learning disabilities, mental health needs and acquired brain injuries, as well as providing care and support to children and young people.