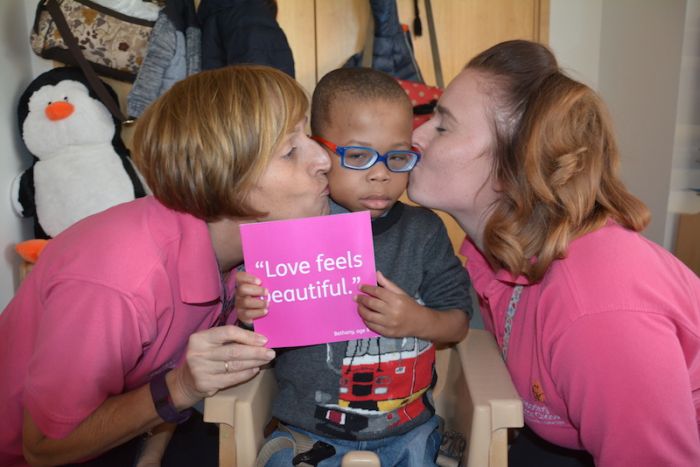 Valentine’s Day cards inspired by Shooting Star Chase supported children and their hilarious and heart-warming views on love, are now on sale to raise vital funds for the children’s hospice charity.

When asked what love means to them during support groups at the charity’s Guildford-based hospice, Christopher’s, sick children and their siblings’ responses ranged from the tear-jerking, such as “Love feels beautiful” to the more unusual, including “To make someone fall in love you need to hypnotise them”.  Supported families and supporters were also encouraged to share their views on love via social media, which resulted in the equally humorous: “Love is not minding sharing my garlic naan”.

Following the responses, Shooting Star Chase, which cares for babies, children and young people with life-limiting conditions, and their families, created a range of seven Valentine’s Day cards which were first released in February 2016. Four cards feature priceless quotes from sick children and their siblings, while three featured the charity’s award-winning fingerprint characters, The Friendlies. The popular range is now on sale for a second year.

In exchange for a £5 donation, lovebirds can get their hands on one of the limited-edition cards to send to their Valentine, by visiting shootingstarchase.org.uk/valentines. The charity is also offering to play Cupid by sending the cards direct, including a personal message or remaining anonymous in true Valentine’s tradition. Each card includes a note letting the recipient know their admirer is a ‘charitable legend’ by buying a card from Shooting Star Chase, guaranteeing further brownie points this Valentine’s Day. Orders need to be placed by midday Friday 10 February.

As well the quotes from the hospice groups which made it into cards, other notable contributions included: “You make someone fall in love with you by buying them a big diamond”, “Love is when my brother hears my voice and smiles at me”, and “Love is when you like someone a lot, lot, lot”.

David Burland, CEO of Shooting Star Chase, said: “Our supported children and siblings’ perspectives on love are incredibly sweet and funny, and we couldn’t help but share them for a second year. The Valentine’s cards are a real reminder of just how funny and wonderfully innocent children can be, and how cheeky The Friendlies are!

“By buying one of these cards people will be helping to make every moment count for babies, children and young people with life-limiting conditions, and their families. And they’ll also be seen as a hopeless romantic and all-round ‘good egg’ by their Valentine, so it’s a win-win.”

Shooting Star Chase is a leading children’s hospice charity caring for babies, children and young people with life-limiting conditions, and their families. Find out more at www.shootingstarchase.org.uk