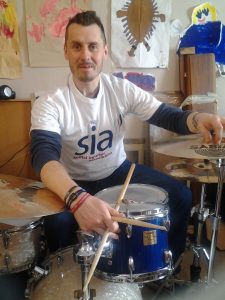 During a year full of celebrations, the Spinal Injuries Association (SIA) will once more team up with Travis to mark their official 40th Anniversary.

On 23 September, the date that SIA was officially registered as a charity with the Charity Commission back in 1974, Travis will be re-releasing their online single ‘Love will come through’ for a month with profits from the sales being donated to SIA.

Travis, a British post-Britpop alternative rock band  comprising Fran Healy, Dougie Payne, Andy Dunlop and Neil Primrose, first became supporters of SIA back in 2002 after drummer Neil fractured a vertebrae in a diving accident whilst the band were touring Europe.

Like many people who experience damage to their spinal cord, Neil’s initial thoughts were for his family and livelihood “After the accident my first thoughts were about my daughters. Would I be able to pick them up again? Then I starting thinking ‘will I be able to drum again?’”.

Later that year, after Neil rehabilitated and spent time building up his strength drumming, Travis hit the studio and recorded 12 Memories, the album from which ‘Love Will Come Through’ originated.

Travis wanted to support SIA with the initial release, and again with the re-release of ‘Love will come through’ this year because Neil appreciated that he regained 95% of his movement, and wanted to ensure support is available to those not so fortunate.

Download ‘Love will come through’ for 99p at www.iTunes.co.uk and find out how you can further support SIA during their 40th Anniversary year at www.spinal.co.uk/page/make40matter

8 out of 10 disabled people and carers concerned about the future, Christmas survey finds.